One of the most interesting and obscure figures in fairylore is Nicnevin. She appears in folklore from the 16th century onwards as a frightening figure that was used by mother's to ensure children's good behavior, a witch and queen of witches, and a Fairy Queen. In modern understanding she is often depicted as a queen of the Unseelie Court of Scotland. The truth of her nature and associations is shrouded in mystery now and comes to us only in hints and obscure references.

The meaning of her name is unknown, although the official etymology is that it comes from Nic Naomhin the Gaidhlig for "daughter of the little saint"; a similar name NicClerith (daughter of the cleric) is given in the 17th century to someone said to be a close relative of Nicnevin (DSL, 2017). Other theories claim the name is NicNemhain, or daughter of Nemahin, connecting her to the Irish war goddess Nemhain. A commentator on Campbell also offers the alternate spelling of NicCreamhain, which he suggests comes from Craoibhean, 'little tree man', as the ultimate source for the name Nicnevin (Campbell, 1900). I personally favor the idea that it comes from Nic Cnàimhan, meaning daughter of the bones, but its really all conjecture.

She first appears in a 16th century poem by Alexander Montgomerie, where he describes her this way:
"Then a ready company came, soon after close,
Nicnevin with her nymphs, in number enough
With charms from Caithness and the Canonry of Ross
Whose knowledge consists in casting a ball of yarn...
The King of Fairy, and his Court, with the Elf Queen,
with many elvish Incubi was riding that night."

This is interesting for several reasons. We are told that she appears with her nymphs - probably a general term for female fairies or maidens - in 'number enough', reinforcing a previous line that referred to her appearing with a "company". She has charms [read: spells] from Caithness and Ross, both counties in the extreme north of Scotland* giving us a geographic point for her. We are also told that her knowledge or skill consists in casting balls of yarn or thread, one might surmise possibly as a method of divination or enchantment. This is an interesting connection to the Gyre-carling, who was strongly connected to spinning, and who will be discussed in more depth later. The poem itself goes on to describe the Fairy Rade she is riding out with in dark terms mentioning that they are accompanied by many elvish Incubi (a common gloss for dangerous fairies), and it says that she is riding with an unnamed Fairy King (Briggs, 1976). This connects her directly to the Good People and counts her among their number, as their Queen. 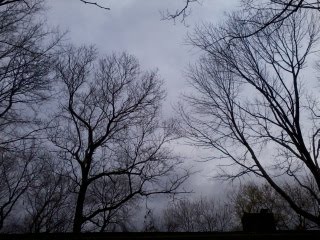 Sir Walter Scott describes her in more depth in this passage:
"...a gigantic and malignant female...who rode on the storm and marshalled the rambling host of wanderers under her grim banner. This hag...was called Nicneven in that later system which blended the faith of the Celts and of the Goths on this subject. The great Scottish poet Dunbar has made a spirited description of this Hecate riding at the head of witches and good neighbours (fairies, namely), sorceresses and elves, indifferently, upon the ghostly eve of All-Hallow Mass." (Scott, 1831).

From this we see an association between Nicnevin and storms, and we see her compared to the Goddess Hecate, as well as called a witch and described as leading a troop of witches and fairies. In the 200-odd years between the two depictions her association with witches has gone from something perhaps hinted at with her skill at magic and charms to something blatant. In the same way the description of the host she rides with has intensified and become more obviously dangerous, riding, as Scott says, 'under her grim banner'.

She is also associated in that quote with 'All-Hallow Mass', however due to the calendar shift in 1752 which moved dates by 11 days when it went into effect she became strongly associated with Novemeber 11th, the old-style date of Halloween/Samhain. Because of this we see her being acknowledged on both the new and old dates of the holiday. I have seen people today calling November 11th 'Nicnevin's Night', and some people believe she rides out with her company between October 31st and November 11th*.

Nicnevin is often identified as a witch, being called the "Grand Mother Witch"; her name was also used as a general name for powerful witches (Scott, 1820). In later witchcraft trials those accused were intentionally connected to the folkoric Nicnevin to solidify their guilt (Miller, 2004). There is evidence of at least three women in the witch trial records of Scotland with last names that were similar to Nic Nevin who were accused and killed for practicing witchcraft. The connection of NicNevin to witches is complex, with her being viewed as both a witch herself, and also the leader of all witches. By some accounts she was a human witch who was burned at the stake in 1569 northeast of Edinburgh, while others claim her as the Queen of witches (Miller, 2004). She is also explicitly called the Queen of Fairies by sir Walter Scott writing at the beginning of the 19th century and in Montgomerie's 16th century poem.

Nicnevin and the Gyre-Carlin are closely inter-related and possibly names for the same being. As sir Walter Scott says: "The fairy queen is identified, in popular tradition, with the Gyre-Carline, or mother witch, of the Scottish peasantry. She is sometimes termed Nicneven." (Scott, 1802). The connection to the Gyre-Carlin is a complicated one, because she may be a separate figure who also has overlapping witch/fairy connections or she may be Nicnevin by a different name; certainly the two have extremely similar characteristics and associations. The name Gyre-Carlin breaks down to gyre, 'hobgoblin, supernatural monster' and carlin, 'a witch, a crone'. The Gyre-Carlin herself - or perhaps themselves as they may be a category of being and an individual - is described as both a witch and a supernatural woman. She is most associated with the area around Fife, where it's said that housewives who don't finish their spinning before the end of the year will have their unspun flax taken by her (DSL, 2017). The Gyre-Carlin was not limited to this one location, however, with her lore found around Scotland and the Orkneys. She was connected to the fairies for both were known to steal or bewitch babies, and she was also thought in the Orkney Islands to live in the ancient neolithic mounds, as did the Fair Folk (Barry, 1867). The Gyre-Carlin was said to be especially active on Halloween [Samhain], New Years, and the time between Candlemas [Imbolc] and Fasteneen [Lent] (DSL, 2017).

Another description of Nicnevin, which directly conflates her with the Gyre-Carlin, comes to us from a 19th century source: “… a celebrated personage who is called the GyreCarline, Reckoned the mother of glamour, and near akin to Satan himself. She is believed to preside over the Hallowmass Rades and mothers frequently frighten their children by threatening to give them to McNeven, the Gyre Carline. She is described wearing a long grey mantle and carrying a wand, which...could convert water into rocks and sea into solid land.” (Cromek, 1810).
Here we see Nicnevin - called McNeven - directly connected again to the Fairy Rades or specifically those processions riding out on Halloween/Samhain. We are also given a rare physical description of her wearing a 'long, grey mantle' and are told she carries a powerful wand that can transmute earth to water and vice versa.

Nicnevin is a difficult figure to suss out. The meaning of her name is unknown and we see it in various forms thanks to the non-standard orthography of the day. Her true origins are lost to history, and she appears 400 years ago as a figure fully formed in folklore, described as leading witches and fairies through the darkness of Halloween night, her unnamed King at her side. She is repeatedly associated with witches, sometimes even said to have been a mortal witch herself, yet she is also clearly associated with the fairies and called their Queen. She rides out during liminal times of year and during storms, leading a cavalcade of 'sorceresses and elves', and she is described as 'malignant' and powerful, explaining, perhaps, the modern description of her as Queen of the Unseelie Court. The references we do have to her imply that she held a significant position in folklore, yet we have no existing myths or stories featuring her. We are left instead only with hints and later writing that seems to assume she would be known and understood by the reader. A modern understanding then, must be built on what evidence we do have and on whatever else can be gleaned from local folklore as well as individual perceptions.


*the two regions are separated by Sutherland, but otherwise represent the northernmost area of Scotland.

*I've translated from the Scots for ease of reading here, the original is:
"Then a clear Companie came soon after clos,
Nicneuen with hir Nymphis, in nomber anew,
With charmes from Caitness and Chanrie in Rosse,
Quhais cunning consistis in casting a clew...
The King of pharie, and his Court, with the elph queine,
With mony elrich Incubus was rydand that nycht."

*this is information I have gathered by talking to various people, and should be considered anecdotal or personal correspondence. I have found nothing in actual history or folklore to support this. That said I think there is a lot of value in the modern practices that have sprung up around Nicnevin which is part of what spurred me to write about her.