One figure from Irish mythology that doesn't tend to get as much attention in modern paganism is the Fenian hero Oisín, son of Fionn Mac Cumhail. Oisín falls into the grey area that many of the characters in the non-Mythic cycles may fall into, where he is not obviously a God but he is clearly not exactly a mortal man either. His mother was a woman of the sí and his father the larger-than-life hero Fionn. Oisín has a fascinating life that is very strongly interwoven with magic, for good and ill, and it seems entirely possible that he lives on today at the very least as a man of the sí. 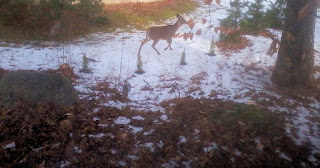 Oisín's mother was Sadb*, daughter of Bodb Derg the king of the Munster sí, who was also a member of the Tuatha Dé Danann. Unfortunately she was turned into a deer by Fer Doirich, a Druid of the Tuatha Dé Danann, who was in love with her; she rejected him and he used his magic to change her form. As a deer she then ran afoul of Fionn mac Cumhail when he was out hunting but his two hunting dogs refused to harm her and Fionn realized she wasn't a mortal deer. Fionn took her to his home at where she regained her form as a woman and the two were married. While she was pregnant though Fionn left and she was tricked into leaving the fort only to encounter the Druid again who struck her with a wand and returned her to deer-shape. Fionn looked for her for 7 years to no avail but eventually found a wild boy living in the woods who he recognized as his son. The boy told him of being raised in the woods by a deer so he named the child Oisín, meaning 'little deer'.
We have this about his birth:
"Oisín mac Fhinn fear go n-goil
ro geanoir a gCluain Iochtair
ingein dheirg a mhthair maith,
torrthach naoi míos ón mór fhlaith." (Smyth, 1988)
[Oisín son of Fionn, man of valour
was born at Cluain Iochtair [Northern Meadow]
his good mother was the daughter of Derg
pregnant nine months with this great lord]

After being found by his father Oisín joined the Fianna and became both a renowned warrior and poet. He appears in many stories from the Fenian cycle of myths and a few beyond it as he was said to outlive the other members of the Fianna (Smyth, 1988). So pivotal was Oisín in the stories that the cycle is sometimes called the Ossianic Cycle and many tales are told by him or from his point of view (MacKillop, 1998).  In one of the most well-know stories, that of Dairmuid and Grainne, when Grainne was originally meant to marry Fionn she first fell in love with Oisín before switching her affection to Dairmuid; Oisín supported the two lovers in their flight from his father. Many of these stories were widespread and commonly known and over the centuries new details and pieces were added that shaped the tales in slightly different directions, giving us an evolving picture of the way people viewed him and the Fianna more generally. In the famous story of Oisín's encounter with saint Patrick we can watch the story evolving in written form from a more clearly ecclesiastical tale that showed Oisín and Caílte repentently converting to Christianity to later versions that show a lively debate between saint and warrior with Oisín defending the value of the Fianna and even tricking the saint through wordplay into getting his God to release the Fianna from Hell (O hOgain, 2006).

Oisín had one son while he was with the Fianna named Oscar with an unknown mother. Like his father his name incorporates the Old Irish word for deer 'os' combined with 'car' possibly meaning friend, although that is uncertain. Oscar was a renowned warrior and famous fighter; when Oisín later encounters Saint Patrick at the end of his life he tells the saint that he would only believe the strength of the Christian God if he saw that God wrestling his son Oscar to the ground and winning (O hOgain, 2006). He also had two sons and a daughter with his wife Niamh in the Otherworld.

In the Acallam na Senorach we are told that both Oisín and his fellow Fianna member Caílte survive the destruction of the Fianna. The two eventually meet Saint Patrick and relate to him what their life with Fionn and his men was like. In other stories from oral tradition later preserved in writing Oisín was hunting one day when he was approached by a woman on a white horse; she was Niamh Chinn Óir [Niamh of the Golden Hair] daughter of Manannán mac Lir. Niamh proclaims her love for the warrior and asks him to go with her back to her home - alternately either Tír na nÓg or Tír Tairngire (MacKillop, 1998). There the two live happily for three centuries until Oisín wants to return to Ireland to visit his family. Niamh warns him against doing this but he insists, so she tells him to ride one of their horses over but that under no circumstances can he touch the ground. Of course when he goes to Ireland he finds the land greatly changed and all who he knew gone from memory. When he leans over to try to help some men move a stone the girth on his saddle breaks and he falls, instantly aging; the horse flees back to the Land of Promise without him.

By some accounts Oisín was buried in county Leitrim on Curran mountain under a standing stone, while other say he is buried in county Down at Sí Airceltrai (Smyth, 1988). However in other stories when Oisín died he is said to have returned to the Sí of Blaí, his mother's place (Smyth, 1988). Given that he was half-sí himself on his mother's side (or half Dé Danann) and returned after death to her home it may be that he did not die at all but like many humans who were taken by the Othercrowd became fully one of the daoine sí. To me this makes more sense than believing he died as he did, given that he was half Tuatha Dé Danann; it would seem odd to me that he died ignobly while stories say the Fianna all sleep and wait to be roused when they are needed again. I would suggest that versions that have his fall to earth, discussion with saint Patrick, conversion, and death are more clearly set as penitent Christian myths of pagans turning to the new God than what we may view as actual pagan mythology. Each version of his story however adds important layers to our understanding of him.

Oisín is a fascinating personage, found in both mythology and folklore, son of a fairy woman and an epic hero. He was a poet and warrior like his father but in some ways the stories show him to be more levelheaded and compassionate than Fionn was, perhaps making him a better role model. He survives the destruction of the Fianna, either the battle itself or by living in Tír na nÓg until their time has passed and it may be that he lives on still in the shining halls of his mother's sí or by his wife's side in the Land of Promise. For those who seek out role models among the Fianna or who are looking for Gods or beings to honor among the people of the sí, Oisín deserves more consideration than he gets. And in any case, his stories are worth reading.

*in some version's Oisín's mother's name is given as Blaí or Blaí Dhearg, and her sí is called Ocht Cleitigh, near Sid in Broga, see Smyth or O hOgain for more on this. Both names, Sadb and Blaí, may relate to terms for places with Sadb possibly meaning a dwelling place and Blaí possibly meaning a field or plain.