Priesthood in Service to the Other - Part 1: The wide view

Recently I've seen a lot of discussion about what exactly pagan priesthood is and should be, which is a good thing. This is a topic that needs to be discussed more often and more thoroughly in a community where many people clamour for the title but fewer are perhaps willing or equipped to do the actual work. John Beckett has written about pagan priesthood in several blogs including 'Preparing for Pagan Priesthood' and 'The Limits of Accessibility for Pagan Clergy' and Lora O'Brien has an entire book coming out this fall on the subject: 'A Practical Guide to Pagan Priesthood'. These are all vital aspects of the ongoing conversation and I sincerely hope that they move the wider understanding of modern pagan clergy forward.

From my own perspective, admittedly as someone raised a bit feral and without structured religion, it has often seemed to me that Pagan priesthood today is heavily modeled after Christian clergy. There is an ingrained idea that a single person can or does serve all roles - ritualist, teacher, counselor, mediator between humans and spirits, magician, organizer. I don't often see the idea of pagan priesthood specializing, or the acknowledgement that a single person may not be equipped to handle all aspects of such service. There's also a pervasive sense that the clergy person may be serving the Gods or spirits but is primarily serving the human community and in place to aid that human community and to help it grow and flourish in its spirituality. 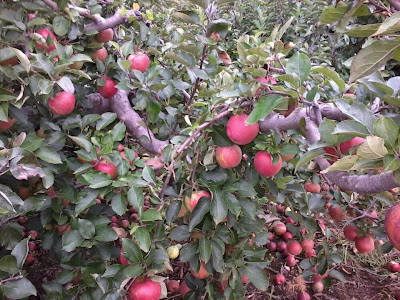 I am not part of that kind of priesthood, although clergy I certainly am.

I can obviously only speak for myself here so I'm not trying to make any blanket statements for everyone who may feel they are clergy serving the Other* and whose experiences differ from my own. Hopefully other voices will add themselves to this discussion and a fuller picture will appear of what this type of priesthood is like. For now I will at least offer my own ideas and experiences here.

The first thing that I would say here is that this is not a path I chose and I suspect that those who end up serving the Other don't do so because they set out to. I'm not implying that I'm special in any way - I don't think I am at all and I know other people who have similar stories - but I do think that it isn't for us to decide that we are going to do this the way we might decide to set ourselves to learn a skill or train for a job. This is a calling, something that we are compelled to do. In point of fact while I can certainly look back all the way to my childhood and see a trail of interaction that logically led me to where I am now up until 2016 I was quite happily focusing on other things; my connection to the Otherworld was only a part of who I was, not the sum total of my identity. That didn't change because I decided it was going to but because They intervened, and I think that's how it tends to go. This is not a choice we make but one we can only fight against or consent to.

Whereas those who are priests/priestesses for the human community are logically focused on serving the human community the focus for those who are clergy to the Other is unrelated to the human community except when and where that human community must be dealt with for the sake of the Other. Let me give an example. Human focused clergy work up rituals whose ultimate purpose includes honouring and connecting to the Gods but which is also meant in large part to offer a meaningful spiritual experience for the human participants which facilitates their spiritual growth or feeling of connection. How much or how little this is the focus will vary, but I have yet to personally see a pagan ritual in this format whose purpose isn't at least in part the experience of the human participants. In contrast when I engage in ritual for or with my spirits it's not about me, it's about them and while I may get a feeling of increased connection out of it that isn't the point - and quite frankly I don't think they care whether I feel moved or not as long as they get what they need from it. I have had experiences when I didn't remember to offer something or do something and they simply took it, which illustrates my wider point.

Another thing I would note based on my experiences is that when the Other puts a person into a position of teaching its for their own benefit not to better humanity. The idea isn't that you are acting to help humans evolve into better humans or achieve some higher consciousness but to help Themselves regain some of their lost respect and position. And those two goals are antithetical. I'm sorry if people disagree with me there, but it's true - in our current hubris-rich, human-centred culture we can't encourage a focus on the importance of humans and act like the Other is hyperfocused on helping us be better and also return to a place where the Other was given an atavistic respect and even fear. And trust me some of them do want to be feared again.

This service is also not predicated on helping or counseling the human community in relation to the Other. Now it is true that people do contact me for guidance about problems relating to the Good Neighbours, but in this context I am not advocating for or trying to assist the humans - I'm on the side of the Other and trying to act as their intermediary in the situation. To use an analogy I'm a bit like a wildlife rehabber who comes in to deal with situations where a wild animal and humans have caused each other problems; the rehabber is trying to get the best outcome for the animal and secondarily the humans. That's basically me in these situations with the Othercrowd. I am not a pastoral counselor or spiritual therapist, I'm an Otherworldly troubleshooter.

Being clergy to the Other is also not in any way easy. My particular focus is the Daoine Uaisle (Gentry) and they are demanding, uncompromising, and unrelenting. This isn't hyperbole. Not to downplay the difficulties that come with serving Gods as clergy because I know that isn't easy either, but in my own experience there is something that is more relatablely human in the Gods, or in how they choose to interact with us anyway, that is absent in the Other. Macha might be sympathetic to my needs as a new mother for sleep and even Odin could be negotiated with but the Good People have only their own agenda to worry about. How their clergy manages to enact that agenda in the human world is the priest or priestesses problem, not theirs. They can also be unremitting in their expectations and their requirements - I have things I'm expected to do, no matter what, and I have prohibitions that I must not violate, no matter what**. This service is not easy, and it isn't something to be entered into lightly. It has a heavy cost and it only grows heavier.

Ultimately serving the Other means focusing on the Other and enacting their will, in some sense. The things that make pagan clergy useful to the human community may or may not apply to clergy for the Other but in my experience for the most part they don't overlap as much as I might have expected. To use another wildlife based analogy I might say that pagan clergy in general are like park rangers their purpose being to aid humans in interacting with an environment and its animals safely and to take care of that place, while clergy for the Other are like those people who wander off to live off grid in the woods and see themselves as part of the environment not a visitor to it. That's a very rough analogy of course but hopefully it gets a bit of the idea across.

This is also not a path for someone who has divided focus or who isn't comfortable othering themselves more than they may already be. It is a hard thing to do and one that once you start doing you can't - as far as I know - stop. It is consuming. It's also important. The Gods and the human community have clergy and as paganism grows those numbers grow and develop, but the Other increasingly is speaking and wants to be heard - and needs more of a voice.
They are reaching out and finding those who can serve that need.

This is a series of posts exploring my personal understanding of and experience with the idea of priesthood in relationship to the Other. I encourage people to read all of them entries to get a fuller feel of the subject.

*non-human spirits under any iteration
**there is of course some crossover here with some Gods but I mention it so people are aware that this is a part of service to them and needs to be considered.
Posted by M.A.D. at 1:36 PM