You would think that when a horribly inaccurate book goes out of print that eventually it would just fade into obscurity...yet in the last week I have heard several different groups as well as people talking about Edain McCoy and her book Witta, which may be the single worst book on Irish paganism ever written. Ever. So I have decided to write a blog book review of it - although I will only be able to touch on the highlights of the errors in the book, as to address every single issue would take almost another book's worth of writing to do. 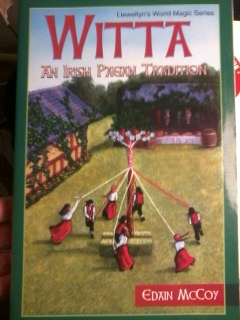 This is an essay I wrote that first appeared on witchvox last year at http://www.witchvox.com/va/dt_va.html?a=usct&c=holidays&id=14394

I have been invited on Raven Radio tomorrow as a guest for part of a discussion about the similarities between Celtic and Norse recon. and practice. I'm very excited, as this is a topic that is - obviously - of great interest to me anyways. Last week the show looked at the academic and historic view on the two cultures, how they are similar and how they differ and tomorrow's show will discuss the modern beliefs and practices and how they compare.
Anyone who is curious can listen to last week's show through the Raven Radio website and hear their take on the historic side of things. There are also some really interesting books out there, including Wells' Beyond Celts Germans and Scythians which looks at the archeological evidence of the different cultures and discusses the often arbitrary assignment of a cultural label to such finds and Gundarsson's Elves Wights and Trolls which includes some great material comparing the way that the Celts and Norse viewed land spirits and faeries.
As for my part tomorrow, I'll be talking about general CR beliefs and practices and how they compare to the Norse ones, touching on topics like offerings, the afterlife, and holidays. I'm really looking forward to it - I think it will be both fun and enlightening.
Anyone interested in listening to tomorrow's show check out Raven Radio's site for the time it will be on in your area, and if you miss it but would still like to listen it will be available in their archive afterwards.
Posted by M.A.D. at 11:52 AM No comments:

So I find that I very much have mortality on my mind, and more to the point the idea of making good use of my time. It is so easy to just let the days slip by, one after another, telling myself "I'll do it later..".  but if there is one thing that is certain about life it's that life is uncertain. So I have been re-evaluating many things, trying to get my space in order, simplify my life, and in the same vein decided to make a bucket list. I'm not generally a big fan of bucket lists - actually I've always thought they were sort of silly - but upon reflection I decided that having a set list of things I'd like to do in my life would be useful and help me stay on track.
The biggest challenge I faced right at the off was that I am a fairly direct person when it comes to goals; if I want to achieve something or do something and I set my mind to it I generally get it done. It's not that I don't have any more goals or plans, it's just that when I think about the big things I wanted to do with my life I'm already pretty satisfied. What I mostly end up being left with is places I want to travel to and those items on my list will certainly present significant challenges. So....

That's all I've got so far. Some of them - like publishing the book of poetry, which is 90% written already - shouldn't be too hard, but others like the travelling plans will be very difficult indeed. I suppose it will be interesting to see how much of this I manage to do and what gets added to or removed from the list over time...
Posted by M.A.D. at 8:57 AM 2 comments:

the Tarot and Odin

This blog post is based on a note I wrote on Facebook, inspired by a dream a friend had...no really ; )  It's mostly just for fun because everyone could use a little fun once in awhile.

If Odin and the major arcana of the tarot were co-ordinated, based on Odin's many bynames.

the Ethics of Information

Sometimes the universe can be funny in how one subject will suddenly seem to come up everywhere. Within the past week several incidents have occurred that have had me reflecting on the nature of owning information; what should belong to everyone, for free, to be shared freely, and what should cost? How important are clear sources in a world of muddy uncertainty?
Twice in the past week I have seen people post online direct quotes they did not write. One was a prayer and the other an excerpt from a book, but in both cases no source was given, nor was it even mentioned in the original post that the person posting the information wasn't the author of it. In the first case when asked if it was okay to share the prayer the person said they had not written it and could not remember the source so, in a move that totally baffled me, the second person replied that they would simply credit the original poster as the source, even though that person admitted they had not written it. A quick Google search turned up the name of the author but even when that was known people continued to credit the poster, I assume because they ignored the discussion under the post. In the second case the person posted a paragraph long excerpt from a book under similar circumstances, but in that case I actually was familiar enough with the book that I immediately recognized it and mentioned the source. The response by the poster was that they liked the subject and just wanted to share. Along those same lines a friend had her entire blog re-posted without attribution by someone who seemed equally baffled as to why that mattered. Sometimes the person may genuinely not realize that it does, and sometimes the person may want other people to think that they did write those words, so they can enjoy the praise and compliments generated from it. And this morning I woke to read a link to a blog talking about yet another site making the rounds that offers free pdfs of many popular pagan books, something that should clearly be against the majority of neopagan morals yet rarely fails to appeal. (yes I admit it mystifies me that the same person who argues to the death that any magic for personal gain is wrong will turn around and cheerfully download over 100 still-in-print pagan books without seeing any issue with it).
Maybe this is a sensitive issue for me because I have experienced it in the past, opening an email to see my own words - my reading list, my spell - under someone else's name and fought back only to get the same reply - who cares? As if I was the one who was wrong, because they say, information should be free for everyone. I have been told that anything spiritual should be free, should be shared, that sources don't matter, or in one case that knowing the true source was the responsibility of the reader not the poster, like some sort of test. Well I will never agree that it doesn't matter or that we shouldn't care. Plagiarism is a big issue in paganism, sometimes by accident and sometimes on purpose, but it will never get any better as long as we as a community put up with it. Now I don't mean things like chants and songs which can be more difficult to track back and spread like ink in water, although it's still worth trying to find sources on those as well, but most other material can be found, and in our online age can be found fairly easily. I would like to hope that it was obvious that any book under copyright - anything under copyright at all actually - should be respected.
On the other hand there are some things that I do agree belong to everyone. Ritual structure, general meditations, things that truly cannot be traced back to any one person. Mythology. The old beliefs themselves. No one person can claim these things and they do belong to all of us.
I think it presents an interesting challenge to the community at large to decide how we are going to deal with the ethics of information. There seems to be a pretty wide spread belief that sources, and citing sources, doesn't matter, and that can only change if we as a community change it. The idea that everything should be free - including books - will only change when the people thinking that way stop and realize how much work and effort goes into that book, or article, or what-have-you and decide that supporting the author (or in the case of deceased authors the family) is better than the quick fix of a free file. What value do we place on something that is free, compared to something that we had to work and save to get? What value do we place on our community itself and it's integrity if nothing matters but instant gratification?
Posted by M.A.D. at 8:54 AM 2 comments:

The new moon was actually last week, but this seems like a good way to start the new (secular) year out. This is my own personal practice whenever I see the new moon for the first time each month, something I have doen for a long time, although the prayer changes; sometimes it is spontaneous poetry, or even silence, while others I might recite some traditional prayer as in this example.
At my first glimpse of the new moon in the sky the other night I kissed my fist, saluted the moon with it, and recited this prayer:
"If you have found us
Well tonight, O Moon,
May your light leave us
Seven times still more blessed
O Moon so fair,
May it be so,
As seasons come,
And seasons go."*

* based on  a prayer from page 123 of volume 1 of the Carmina Gadelica. The original is:
"If to-night, O moon, thou hast found us
In peaceful, happy rest
May thy laving lustre leave us
Seven times still more blest.
O moon so fair,
May it be so,
As seasons come,
And seasons go."
and can be found at http://sacred-texts.com/neu/celt/cg1/cg1057.htm
Posted by M.A.D. at 9:52 PM No comments: