I've talked a couple times now about the idea of service and I've realized that maybe I need to clarify what I mean by that.
Most people who honor the Gods and spirits* do so as the equivalent of what might be called laymen: someone whose religious activity is a part of their life but who would look to others to lead or for specialized help. Some people, in my view, end up being called by the Gods and powers to serve the role of being those leaders and specialized helpers. This is a logical process and its how most things work, really. I use a computer, but I look to a more tech savvy person when I need help with my computer, whether that's getting my pc and printer to talk to each other, removing a virus, or updating something. In the same way religious communities naturally are mostly people who are content to practice the religion without wanting the responsibility or hassle of having the specialized knowledge. Now obviously not all leaders in paganism are leaders because they are called to it by higher powers, but I do think many are.
So, I've talked in my last blog abut how people who are called by the Gods are called to serve - what does that mean? I would say that it means to serve that God or those Gods within the community, either directly or indirectly. How this will actually work will be different based on each person's skill set, but some people may be called to be ritual leaders, some to write prayers (or books), some to teach; all iterations though on the theme - re-building the worship of that particular God, or more broadly that religion, in the world. Even the people who end up with a more reclusive approach tend to contribute to the broader community in some way, usually through their writings.
Those who serve fill a need, one that is painfully present in our modern community - call it Deity outreach. Because someone has to do it, has to be out there rebuilding the broken connections and teaching the new generations how to interact with the Old Powers. Someone has to step up and create community; someone has to be a guide for beginners seeking something they don't fully understand; someone has to teach us how to connect to our own roots; someone has to bring back the honoring of Gods and Powers almost forgotten. And that is, I think, ultimately the types of service I see people being called to.  When the Gods find a person suited to serve their purpose they push, nudge, poke, inspire - aka call - that person to that work. It isn't fancy or glamorous, its mostly just hard work, and I often wonder why anyone would do it if they didn't feel called to do it.
Now, having said all that in my own cynical, it-must-be-done, way, I'll add that it isn't all hard work and no play. There is plenty of joy and just plain fun in doing what needs to be done. There's moments that are absurd and ridiculous, particularly if - like me - you do much with the Fey. There are beautiful and moving experiences and there are indescribable moments of Mystery that are invaluable. The Gods are all about reciprocity; it isn't all just giving, giving, giving on our end and nothing back. I can honestly say that I would never have personally chosen to do many of the things I've done in service, but I have truly enjoyed the experiences I've had along the way and I'm glad I took the road less traveled by.

* really this could be Gods, a God, daoine sidhe, ancestors, anything like that but for simplicity here I'm just going to say "Gods" and you can switch in or out whatever specific term you want to.
Posted by M.A.D. at 7:53 AM No comments:

Why None of Us are Special Snowflakes

This blog should probably have a blogging while ill warning label. So you've been warned. 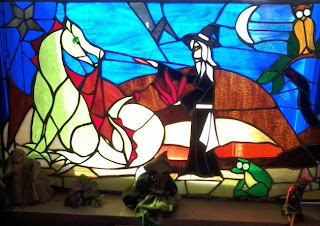 There's an expression in modern pagan communities: special snowflake. It's used for people who are very vocal about having a strong connection to the Gods, or who claim unusual knowledge, power, or authority or otherwise seem to be trying really hard to get attention. It's based, of course, on the idea that all snowflakes are unique while simultaneously being uniform but the special snowflake believes they deserve extra attention and praise for being themselves. In paganism there's a wide array of ways that people fall into special snowflake categories, but the one that I probably see the most often, and hence that annoys me the most, are the ones who feel that they have been called to some unique service that deserves automatic, unquestioning respect.
You know what though? Many of us, myself included, are called to serve; service doesn't make you special, it makes you useful. The fact that people don't like to acknowledge is that we are all extremely temporary to the Gods and spirits. Our mortal lives are moments in their far broader reality. Do we have value to them? I 'm certain we do, even on an individual level, but that value is not eclipsed by their wider need to accomplish certain things and keep an eye always to greater goals. I won't ever pretend to understand the wheels within wheels of Odin's plans - I know I have a value to him and serve a purpose, but I am also keenly aware that when I am gone someone else will take my place. We are none of us special in the grand scheme of things because we are all ultimately utilitarian. We serve our purpose, either well or badly, and when we fall to time's inevitable limits the next one will come along to serve the next step. No matter how knowledgeable, how powerful, how skilled, or how well a person serves the Gods their time is limited and the importance of their power, knowledge, skill, and service in their life is not measured by how special they think they are, but by how they effect the lives of other people and how well they serve their purpose. And that, ultimately, is only truly measured and judged with time.
Special snowflake syndrome annoys me because it distracts from the important issues. The things that matter, that we should be discussing as a community, don't revolve around cult's of personality and one individual's (or many different individuals') need for special attention. As a community we waste far too much time and energy encouraging or fighting special snowflake syndrome when we should just be ignoring it. There is so much work to be done and we need to focus on doing it, not trying to prove how much more important we are to deity X or spirit Y, or conversely that some other person isn't. If a person is actually a special friend in that way to a God or spirit then it is the God or spirit that will make it plain, not the person - that's how its always worked in mythology and folklore and I don't see any reason why the internet would change anything. In fact if one were cynical, which I clearly am today, one might point out the many prohibitions in some cultures, like the Irish, about talking or bragging about special consideration you receive from the daoine sidhe, for example, lest you lose that friendship...
None of us are special snowflakes, and we need to stop encouraging people to try to be.
Posted by M.A.D. at 3:56 PM 4 comments:

I am doing Nation Novel Writing Month (NaNoWriMo) this year for the first time. The past few years I have sat and watched many of my friends do it and felt rather envious of how much fun they seem to be having. All the talk of word counts and plots; even the wailing over blocks and rewrites seem like a great time. Me, I write non-fiction or on occasion poetry. I enjoy it, but its definitely more work than any kind of fun.
This year I am going totally out of my own comfort zone and writing a novel. I haven't written fiction in almost 20 years and my own taste runs to an ultra niche genre that isn't likely to interest a huge audience. So I decided not to write it for anyone but myself; I'm doing it just for the pure joy of telling the story. I'm not worrying about how well or badly I'm doing it or whether other people will like it. I'm not planning to publish (although I think I will take it all the way through to a final draft) so I'm not writing it with an eye to marketing it or making it appealing to the public. After talking with a few friends I even stopped my own inner critic who automatically tries to write for what I think others want to read.
So far I've found it to be an amazingly liberating experience. I'm remembering why I used to love writing, why I have so many notebooks from high school full of tediously handwritten stories. I'm telling a story I want to read, and its fun.
Posted by M.A.D. at 7:59 AM 2 comments: