A Critical Look at Fairy Faith in Celtic Countries 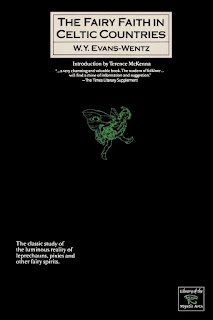 One of the most commonly recommended books I see in groups and on reading lists is the 1911 work 'The Fairy Faith In Celtic Countries' by W. Y. Evans-Wentz. The book is often hailed as the benchmark in fairylore and a staple of study in the field or for anyone interested in the subject. I also personally suspect its rampant popularity in modern pagan groups is due in part to it being in the public domain and easily found free online. However the book is often recommended and read by people who take everything in it equally and out of context so I think it would be helpful to discuss the text here.

To start let's be clear for what it is and when it was written 'Fairy Faith' is a very good book. It includes material from scholars who were pre-eminent in the field at the time, such as Douglas Hyde and Alexander Carmichael. It also is a treasure trove of anecdotal material of the early 20th century (found in section 1) and for that alone I recommend it. It does a wonderful job of clearly stating exactly where anecdotal material comes from which allows us to get a regionally specific look at the beliefs, something that is essential in understanding them, contextualizing them, and correlating them with current beliefs in those areas.

All of that said the book is not a perfect work (if such a thing even exists) and it is important to read it with an understanding of the flaws so that the valuable material can be found and appreciated. Let us begin by putting it in the context of the time period it was written in. Evans-Wentz began this work as a dissertation in which was first reviewed in 1907 and published the final book as we know it now in 1911. This was before the Republic of Ireland existed - Ireland was still an English colony during the entirety of the research and editing of this text. An Gorta Mór* was barely 60 years prior meaning there were people alive in Ireland who had lived through it when these interviews were done. This was, obviously, also before both world wars. The discipline of psychology was less than 40 years old and Freud had only just began corresponding with Jung, vital to remember as the book claims to incorporate ideas from that field into its approach. My point in emphasizing this is that one must read this book with an understanding that it was written in the early 20th century not the 21st century and in many ways reflects a very, very different world from our own.
Academia of this time was also different and often included personal opinions presented as if they were facts, meaning that material may be read as if it were authoritative when it is not. It wasn't uncommon for a scholar to put forth a theory with absolutely no supporting evidence beyond tenuous suppositional connections between superficially similar material, for example the idea that the visually similar words sidhe (Irish, fairy hill, pronounced shee) and siddha (Sanskrit, perfected one, pronounced sid-uh) were directly connected. The burden of proof and requirement for supporting a theory were not what we might expect of academia today.

The people who wrote and contributed to this book were not writing their own beliefs or recording their own stories. They were people of a higher social class, well educated, who may or may not speak the language of the people they were talking to, going into various areas as visitors or guests and then asking about these beliefs and stories. I often talk about discernment when it comes to reading material and I emphasize looking at who is writing the material down and this is true here. You cannot read The Fairy Faith in Celtic Countries without keeping in mind who wrote that material down; as much as we might like to see it as a natural snapshot of belief at the time it is more accurately understood as a posed portrait of the beliefs, fitered through the lens of the writers.

I mentioned that not all the writers necessarily spoke the languages they were recording material from and that is an issue. There are multiple places in the book where the Celtic language material given does not align with the translation and Anglicization of that same term. For example on page 81 the author claims that suidheadchan means 'the housekeeper's little seat' while the word simply means 'seat' or 'chair'. I strongly urge readers of the book to double check all non-English terms within and never take any of it as accurate.

There is a lot of classism and bigotry that appears throughout this text, predicated largely on the fact that the people writing were often upper class educated people who considered themselves better than the 'peasants' whose stories they were recording. Evans-Wentz falls into this trap as well, describing the so-called Celts with a strong noble savage angle: "This immersion in the most striking natural and social environment of the Celtic race, gave me an insight into the mind, the religion, the mysticism, and the very heart of the Celt himself" (Evans-Wentz, 1911, page xvi). There are a multitude of references to the 'Celtic race' or the 'Irish race' (for example) because these were writers who believed that the Celtic language speaking peoples were in fact a distinctive race who was less than and more primitive than the British. This romanticism of the Celtic language speaking cultures into something simultaneously more primitive and more spiritual is something I still see in some places and it needs to be addressed and stopped.

Another major issue with this book is the outdated theories to be found in the 2nd, 3rd, and 4th sections. These theories are long disproven yet keep showing back up, particularly in paganism, because people are reading works like Evans-Wentz's and taking it as accurate. One glaring example is the long discarded idea that fairies represent a folk memory of a pygmy race of humans driven out by the iron age and celtic migrations. As on page 398: "...one of the many threads interwoven into the complex fabric of the Fairy-Faith round an original psychical pattern may have been bequeathed by a folk-memory of some unknown, perhaps pygmy, races, who may have inhabited underground places like those in certain tumuli.". This is put forth as a theory but many seem to read it as a fact, however this one has been disproven on multiple fronts. There is absolutely no archeological evidence of a culture of smaller humans inhabiting Ireland or the UK. The cairns and tumuli are burial mounds, many with human remains found within. And the theory of a celtic population migration has largely been disproven by genetic studies (rather the Celtic influence seems to have been a shift in culture rather than mass population movements).

In general when reading this book you have to keep in mind that it was written by people who were either outside the culture being discussed or had a very high social place within them, which distorts their perspectives. The anecdotal accounts are indeed invaluable but they too must be understood for what they are which is not any kind of definitive statement but often personal opinions and experiences. The so-called scholarly sections - 2, 3, and 4 - should be taken as opinion pieces and fact checked with modern scholarship.

There is a lot of value in The Fairy Faith In Celtic Countries, but there is also a lot that needs to be questioned or ignored. I recommend the book and encourage people to read it but with a discerning eye and an understanding of the context in which it was written. It is 109 years old now and the world it was written it is very different from the one we live in; academia then was very different from what it is today. None of this is to discount the value this book can have, but that value rests on understanding the contents for what they are and not seeing them as unassailable truth in all aspects. If you read it with an understanding of the things discussed here then the book can be very useful; if you don't, if you read it all as equally true, then you will be working from a lot of inaccuracy.

*An Gort Mór, the Great Famine, which decimated the Irish population
Posted by M.A.D. at 12:01 PM 2 comments: