Cuchulain sprang onto his own chariot after that. Then nothing was there of all of them not the woman, not the chariot, not the horse, not the man, not the cow and he saw that she was a black bird on a branch near him.
"A hurtful woman you are," said Cuchulain.
"It is Dollud then that will be the name of this bog until Judgement Day," said the woman. Bog of Distress was its name from that time afterwards.
"If only I had known it was you," said Cuchulain, "not this way would we have parted."
"Whatever you would have done," said she, "misfortune would result from it."
"You cannot bring misfortune to me," said Cuchulain.
"I can indeed," said the woman; "It is at the final touch of your death I am and shall be," said she.

Copyright Morgan Daimler
Posted by M.A.D. at 4:39 PM No comments:

A Prayer to an Cailleach During Storms

Cailleach, Lady of Winter,Winter of hard snow,Snow driven by windWind roaring, fierce,Fierce Hag, I pray to you
You, who can be gentle
Be gentle to my home
My home and my family
My family and little children
Children who offer to you
You, Cailleach of Winter,
Winter hard and cold
Cold kept back by warmth
Warmth that we share
Share what we have with you
You, who can be gentle
Be gentle with those
Those who offer in your storm
May your storm pass us by
pass us by unharmed 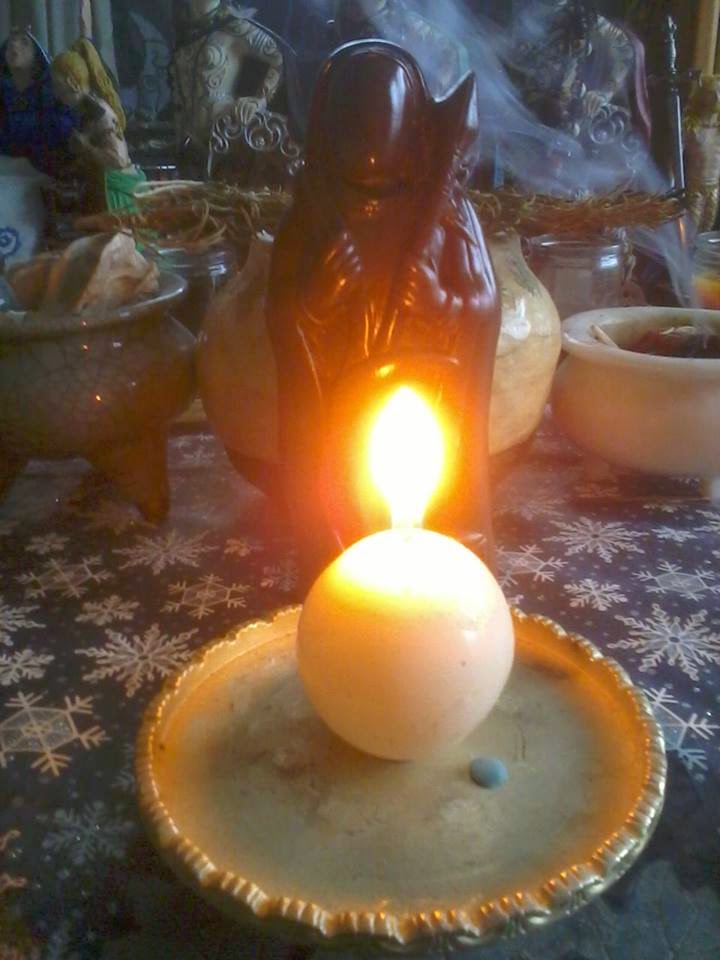 The Morrigan and Plans for 2015

I'm sure many of you would rather see more translation here, and don't worry I'll get some more done soon. I'm working on a new manuscript at the moment which is taking up some time, but hopefully next week I'll get to some of the other fun untranslated bits of the Cath Maige Tuired...
I dreamed last night of the Morrigan, and this morning I was asked to do a workshop about her (them) next month so I thought it might be good to offer a short blog today just outlining some of this year's plans, where I'll be and what I'll be doing.
I'm going to Pantheacon next month which is a very exciting first for me. I'll get to meet a lot of awesome people and spend time with some friends, including Stephanie Woodfield who is dragging me out there with her (I haven't been on a plane since I was 10 years old). It will be an adventure. While I'm at the con I'm going to be doing an informal workshop in the ADF hospitality suite, on Friday at 4, about the Morrigan in different myths. I'm really looking forward to it and think it will be a lot of fun, and I'm honored to have been asked to do it. So if you happen to be at Pantheacon and in the mood to hang with some Druids and talk Morrigan, come check it out.
In June I'll be at the second annual Morrigan's Call Retreat teaching a workshop or two and helping with rituals. Last year was amazing and I'm sure this year will be even better. We have Jhenah Telyndru from the sisterhood of Avalon as a speaker and Mama Gina as a musical guest, as well as the usual suspects and some new faces.
At the end of October I'll be participating in Seeking the Great Queens: a Sacred Sites Tour in Ireland. It is a sacred sites tour focusing on sites associated with the Morrigan and her mythology and includes celebrating Samhain at Tlachtga. There will be workshops, discussions, and rituals, and I have no doubt it will be a once in a lifetime experience.
It's going to be a busy year, and very Morrigan-focused, but I'm excited about it. 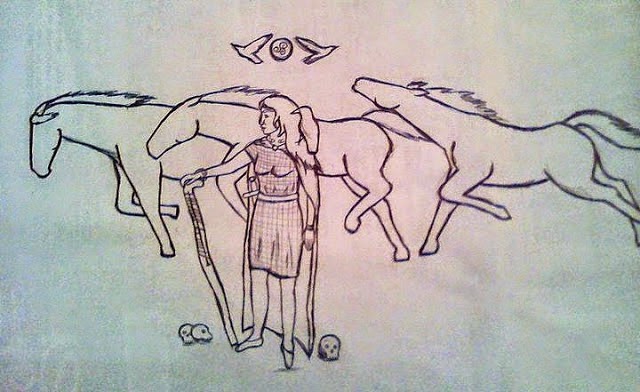 Today I want to take a look at the second half of the Morrigan's prophecy after the battle of Moytirra, which Gray does offer a translation for, but with significant sections excluded:

She was afterwards among them prophecying the years at the end of existence,  and further promising each evil and lack in those years, and every plague and every vengence: so that there she chanted her poem:
"Something seen is a world that shall not be pleasing: summer deprived of flowers,  cows deprived of milk; women deprived of modesty, men deprived of valor. Conquests without a king, pointed, bearded, mouths of many-oaths, sorrow, a lord without judgments*. Sea without profit. Multitude of storms, excessively tonsured, forts, barren of structures, hollow, a stronghold coming from mistakes a devastated time, many homeless, an excess of lords, joy in evil, a cry against traditions, bearded faces**. Equipment decaying, numerous exploits, finding battles, silent towards a spurred horse, numerous assemblies, treachery of lord's sons, covered in sorrow, crooked judgement of old men. False precedents of judges, a betrayer every man. A reaver every son. The son will go lay down instead of  his father. The father will go lay down instead of his son. In-law each to his own kinsman. A person will not seek women out of his house. A long enduring evil period of time will be generated, a son betrays his father, a daughter betrays [her mother***]"

* "feda cin mes" can be translated as "a lord without judgments" or alternately "trees without acorns"; given the rest of the sentence is discussing the difficulties caused by lack of a king, the lord version seems more logical
** sometimes a reference to Vikings
*** the manuscript ends with "a daughter betrays" with the next page missing, however it is logical to assume the line should be "a daughter betrays her mother"
Posted by M.A.D. at 12:36 PM 1 comment:

Last year was a very busy one for me. I had four books published - Fairy Witchcraft and Pagan Portals: the Morrigan through Moon Books and the first two in my urban fantasy series Murder Between the Worlds and Lost in Mist and Shadow (self published); I also had pieces in three anthologies this year. I wrote for the blog as well as guest blogging on Raise the Horns, and writing articles for journals and e-zines, including one for Goddess Pages on the Morrigan. I taught at ADF's Wellspring, at the Morrigan's Call retreat, CT Pagan Pride Day and the Changing Times, Changing Worlds convention. And I had the always fun experience of being a guest on the podshow the New Normal as well as appearing on another podcast, Main Street Universe, where I talked about Fairies. I ventured into the new and interesting world of translating older Irish manuscript material, which I've really been enjoying (and look for more of that soon). And of course in between all those shenanigans was Real Life with children and grocery shopping and bills.
Now we are heading into to 2015. I had genuinely intended to make this year a quiet one, but it doesn't look like that is meant to be. My next novel, the third in my urban fantasy series, is coming out at the end of this month, and I have a piece I am writing for another anthology. I have several other book projects in the works as well as articles coming out in the next issues of Air n-Aithesc, Pagan Dawn, and Goddess Alive. I'm attending Pantheacon for the first time this year, and am already scheduled to teach workshops at a spiritualist church, at the second Morrigan Calls retreat, as well as on a Morrigan Sacred Sites tour of Ireland, and tentatively at CWPN's Harvest Gathering.
I do plan to keep up with the blog, including continuing with my translation efforts. Hopefully I will be back to my regular blogging schedule now, but I wanted everyone to understand that as my non-blog writing has increased - and as real life demands have taken a lot of my attention - it has gotten harder to give the blog the attention I want. I'd rather not write at all than write when I don't have time to cite sources and give it the quality it deserves.
As we move into the new year my goal here, for the blog, is to find a balance between more academic entries and more experiential entries. And to get back on my twice-a-week schedule. So happy new year to you all, and stay tuned.
Posted by M.A.D. at 9:06 AM No comments: