So time for another book review. Today I want to write about my friend* Dana Corby's book 'royal Roads: Pilgrimages through the Four Elements and Beyond' co-authored with Bjeon-Erik Hartsfvang. I'm friends with Dana on social media and became aware of this book when I saw her posting about it. Its a bit outside my usual purview but I think it overlaps enough with my own witchcraft practices that it makes sense to review it here. 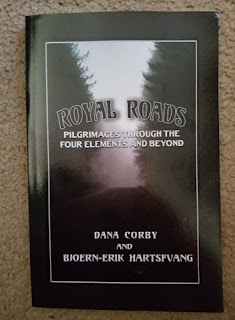 Royal Roads, on the surface, would appear to be a book about connecting to the four elemental realms of Wicca and most popular forms of paganism. However this slim books is about far more than just that, digging into vital topics like spiritual journeywork and warding. I particularly liked that it used practical examples to illustrate points and also included a lot of clear instructions for the exercises. It's the sort of book that manages to convey more complicated material in a very accessible way, and that is something I wish I could say about more books.

After the introduction the first three chapters teach the reader how to make a scrying mirror, create magical fluids, and cast a circle. Although my own witchcraft has a different flow to it I appreciated learning these methods and understanding the concepts behind them. It was particularly nice to see the older method of creating a scrying mirror described, as that's something I haven't seen discussed in a long time. I also very much liked that the chapter on circle casting laid out various reasons why a person might cast a circle, another subject which often tends to be ignored or only get a surface treatment.

Possibly my favourite chapter was 5 'Standing Black Watch'. This revolves around the wider concept of properly warding a ritual space by having a person outside the ritual activity guard the area and people. It is particularly essential in group workings (as well as some types of ritual seeing or oracle practices) but isn't something I have personally seen written about very often. I think the authors here handled it very well and loved that they included practical examples of the concerns that come up when a group isn't properly warded or the energy handled as it should be. Honestly I would recommend this book just for this chapter.

The chapter 6 gets into how to engage in spiritual journeywork through guided relaxation and 7 through 11 are various suggested 'pilgrimages' or journeys. Some of the initial structuring is heavily focused on a specific Wiccan approach, which isn't my personal path, but even for people like me who don't tend to be correspondence heavy with their approach I think these exercises have a lot of value. The actual guided script is very good and takes a thorough approach to getting people in and out of themselves.

Chapter 12 is a short discussion of the post journey experience, including a method to retain as much information as possible. Again this is something that other books often lack and although its a short chapter it includes an excellent group of questions to answer framed to help maximize how much is retained. I've always been an advocate of journaling immediately after journeying but I had never thought to use a specific set list of questions to help with that. Its an idea I intend to use myself going forward.

Overall I found this book valuable, despite its divergence form my own personal practice, and enjoyed both the material I was familiar with as well as that which was new to me. I think the book would be useful for those just starting out but can also offer some useful tips for more experienced people. The exercises are some of the best I've seen and I believe the results people can get from them will be both interesting and useful.

*I am friends with Dana Corby on social media, however that has not influenced this review. If I had not liked the book or thought it was worth recommending to others, I would simply not have reviewed it.
Posted by M.A.D. at 1:50 PM 1 comment: