Earlier this year there was some talk in a Fairy Witchcraft group on Facebook about a liminal god called the Queen of Apples. Several people felt like they were connecting to her and shared their thoughts on who she was. I was asked what my impression of her was.
It's important to understand here that the particular type of Fairy witchcraft I practice gets very messy when it comes to Gods. There's the traditional ones, of course, who come in from known cultures and existing mythology. There's also beings explicitly associated with the royalty of Fairy that we may consider gods but who may or may not historically have been understood as such. And there's also the third category, the liminal Gods, who are beings that have no known or shared names but go by titles and who are seen as Kings and Queens of Fairy (or similar) and also deities but have no known established mythology or stories. These liminal Gods are diverse and individual beings and while there are some that seem to be more over-arching or shared among practitioners - for example Summer and Winter in this system have their rulers which seem universal so far to everyone who engages with them - there are also myriad individual ones. Different practitioners will connect to who they connect to. I have written about many of them in my books on fairy witchcraft and have also blogged about my own personal experiences finding new ones in 'Meeting a New Liminal God' and 'Meeting New Liminal Gods: Thallea and Thessilae'. I also talk about the 7 Queens, who are liminal Gods in my opinion, in my writing about the rituals around the Pleiades cycle. The point is that when it comes to liminal gods there are no firm lines or established limits; there are the ones that have been publicly discussed and undoubtedly many more that haven't.
So. Initially I didn't get very much about this new Queen. This happens of course as the Powers speak to who they choose to speak to and the liminal gods in particular do what they want when they feel like doing it. Nonetheless I've tried a few times off and on over the past months to connect to her and had been getting a 'not now' feeling every time.
Today, on the winter solstice she's speaking very loudly to me. It feels like now is also a good time to share what is coming through for her. This is what I'm getting, mostly unfiltered. Obviously this is pure gnosis and people are free to take it, leave it, add to it, or whatever. I would really love to see some discussion in the comments by those who have an interest in Her or who feel like she speaks to them as well.
The Queen of Apples
I'm using her/she pronouns here and she appeared to me as a young woman but I felt very strongly that she can and will appear however she chooses and that she may appear as a Lord of Apples if it suits her. She is both and neither, androgynous and gendered, rather like the trees themselves to be honest. It may be more fitting to use they/them pronouns but I leave that to the individual readers discretion. I suspect she will come through to some people strongly as one gender or another, to other people as neither, and to others as both or moving fluidly between.
She is the seed of new beginnings, the sweet flesh of the apple that nourishes, and the hidden death that waits within. She can be utterly generous to those who seek a home in her groves, offering safety, shelter, and nourishment but she can also be ruthlessly mercenary to those who seek what they want rather than what they need. She offers both filling food and health as well as intoxication and madness; she is as much apple juice as hard cider. She is joy and desires met, whether those desires are wise or foolish. She is the wild grove feeding all who find it and the domestic orchard that must be worked to return any benefit. Whether your dealings with her are difficulty or easy will depend on many things and may change from one encounter to the next.
She is the flower, and the fruit, and the withering leaf. She may appear very young or indeterminant aged or very old. She is all of these.

In the facebook group discussion Brie C Marva described her this way: "a deity of brothels, personal freedom, and rowdy celebrations... She is the goddess to honor before a first date, a party, or something more adult if you follow me. Young, dark hair, dressed as a Byzantine girl not of the higher class, she seems to be pleased with offerings of wine, various incense types, and donations made in her name.". Several people had similar experiences or feelings around this deity including feeling like she had connections to sex or brothels, that she appeared dressed in the style of the Byzantine empire and appeared in the form of a younger woman or girl. Some people felt that she had strong ties to the Byzantine empire or that area. The group also suggested she might have a holy day in the autumn.

For myself she appeared to me as a girl of about 14 initially in a grove of snowy apple trees in flower but changed as we talked into a young woman then a very old woman and at one point a young man, so...I'm unsure how I'd describe her. I didn't get the same strong cultural feel that other people did either, so I can't confirm or discount it. I'd say let her speak to you herself on that one.
Her colours as they were shown to me were red, green, white, and brown. Her animals are the bee, deer, and worm. These are the symbols that represent her and the language that she uses to speak. Apples in any form are also hers as is honey.
Her special time is the winter solstice and I felt strongly that she's connected to things like wassailing the apple trees, so I gather that she enjoys singing and music especially. She is a deity of sex workers, brewers, and wild things, of the disenfranchised, marginalized, and of witches. Her magic is (particularly) protective and enchanting but she also hexes as much as she heals. She belongs to neither summer nor winter but moves in each. 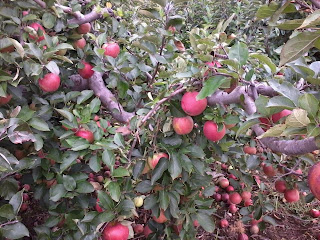 The Return of the Otherfolk and the Puritan Egregore

For several years now there has been talk among some practitioners (of various sorts) in North America suggesting both that the Otherworldly energy present here has been increasing and that the Otherfolk themselves have been pushing through into the human world more strongly. I wrote about it on my Patheos blog in a piece titled 'Return of the Othercrowd' and Seo Helrune and John Beckett have also discussed this.

Many people approach this idea of a restoration of the Other eagerly, others with trepidation. But I haven't seen many yet discussing the inevitable pushback from the existing paradigm and I think it's important to talk about that as well in part because we are already seeing it. 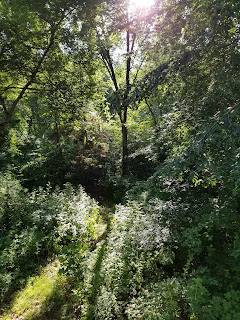 So. Part of the idea that this concept rests on, much more eloquently explained by Seo Helrune in the blog I link above 'Restoration Not Re-enchantment', is that the force which originally drove the Otherfolk to the fringes of the human world was Christian Dominionism. This philosophy carried by Protestants in both Europe and colonizing North America demonized the Good Neighbours and made them into evil forces to be driven out or fictions to be dis-believed in. It strongly perpetuated the idea that the fairies had left the human world and were a thing of the past and encouraged trivializing and infantilizing them.

What we are, perhaps, seeing now in some places is the Other fighting back against that and pushing to strengthen their presence in the world again. Why now? I can only guess. Certainly they have never truly left no matter what the poets have said so it is not a matter of a return so much as a re-empowering. This seems to be happening across a wide span of time, at least a decade at this point with the last 5 years being more active, which I'd think would be expected. How long will it go on for? How will it end? We will have to wait and see.

Is this happening because of the upheaval in the human world around the same areas or is that upheaval a symptom of what is happening in with the Other? Or are both impacting each other? We don't know. There is turmoil here, but that does happen and is always happening somewhere. There is turmoil there as well which seems to be spilling over to here in some places. We are sitting in the middle of the pattern and I don't think we can see the forest for the trees, so to speak.

That all said my main point here is that as we see this increase in Otherworldly energy and this upsurge in activity we have been tending to focus on it, which is perhaps natural. But we would be wise to remember that the dominant cultural force that caused Them to be subsumed in the first place - whether you want to label it the collective puritan unconscious (in the US) or the Protestant paradigm or the egregore of the over-culture - is still there. It still exists. And whatever it is, however you choose to understand it, it is connected to millions of living and dead humans that empower it and it is going to and is fighting against this current shift. I think we are seeing that manifest in the US in many ways, small and large, and we need to be very wary during this period.

While some of us may be cheering on the Otherfolk and eager to see them returned to their former glory - whether that's wise or foolish on our parts - we must not assume that such a return or shift in energy will be easy or painless. History shows us that major shifts of any sort never are. The Other are fighting to return, and we can be very sure that the force that pushed them out will fight just as hard to keep them out. We need to be prepared for that and understand that it may mean that force, that cultural egregore, that puritan unconscious, may strengthen before (if) it is broken. And we need to understand that the Other fighting to return isn't going to be painless for us either whether we are on the sidelines or trying to encourage it to happen.


A few points I feel obligated to make: