Some Advice For Former Christians About Unpacking Christian Baggage 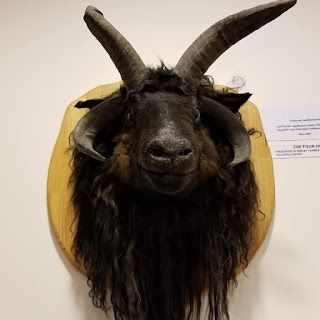 I've never made any secret that I wasn't raised Christian but rather grew up a secular agnostic, with all the fun of Santa and a magic chocolate delivering bunny. I actively got into paganism and witchcraft around the age of 11 or 12 and have been practicing since; I didn't make an effort to learn about Christianity until I was in my 20's. This gives me a different perspective on some things than people coming from a different background and sometimes that difference is more obvious than others. In particular it tends to be highlighted for me when I am accused of having Christian baggage - as I pointed out on my social media, if anything it would be more accurate to accuse me of non-initiatory Wiccan baggage - and also when I see particular ideas or concepts in paganism that do seem to be influences from the outside. I thought it might be helpful from this perspective to offer a couple suggestions for people coming from Christianity who are trying to let go of their former religion.

I want to preface this though by saying a few things first. I don't personally care if you syncretize your paganism or witchcraft with Christianity or any other monotheism. Syncretism has been going on forever. I also don't care if you personally actively blend Christianity into your beliefs and practices. Have at. Whatever works for you. What I do care about is people looking down on other people for the aspects of their former religion they may be unconsciously dragging along with them and the way that many people who converted to paganism from Christianity have come with preconceived notions that can be harmful to others. Particularly to others that don't share those ideas or ingrained assumptions.

The idea of 'Christian baggage' shouldn't be a pejorative used against people but something that you either choose to actively work with or actively overcome.

So. That said, here are some suggestions from an outsider for people coming into paganism from Christianity who want to be aware of what they are bringing with them. These are all based in my years of observing from the outside if you will and the things I have seen people focus on or be bothered by that baffle me, and which I assume then are shadows of their former belief system. These will not all apply equally and may not all matter equally to everyone and that's fine. But I do encourage people to give some serious thought to this.

A basic list here, and I'm sure it could be added to. I suppose it could all be summed up as 'look at how you are still centering Christianity in your life and find ways to stop doing that'. Obviously since I'm not coming from that background I am not the best one to offer ideas of the nitty-gritty how to there are even point out more in depth ways that former religions show up in new ones but hopefully this at least offers a start for those who want to shift entirely into something new.

Editing to add: these points are specifically aimed at individuals trying to work through their own issues with their birth religion. Dealing with issues relating to wider cultural and institutionalized Christianity is a separate topic and one that does not fall under the purview of this article. While we may choose to root out these things within ourselves or not, looking at the wider impacts of cultural institutionalized Christianity often reveals problems and abuses that must be confronted en masse and resisted or over turned on equally wide scales.

*unless of course you are syncretizing the two, but that's something totally different.
Posted by M.A.D. at 12:12 PM 5 comments: