Novels, Sequels, and Looking Back

So I'm working on the sequel to the novel I wrote last year for NaNoWriMo, and I'm having as much fun with it as I did with the first one. Something I did to help stay motivated during NaNoWriMo last year was to post word counts and little summaries of plots points or how the writing was going every day. I'm doing it again for the new book on facebook but I thought it would be fun to post the recap of all the posts from the first one, Murder Between the Worlds. It's an interesting look back at the process I went through while I was writing and also some fun hints about the way the story developed:

14,739- I have totally jacked up my protagonists day. Don't judge me! Also this book officially needs a warning for graphic content.

17,882- My protagonists day has not improved and the plot is even thicker.

19020 words- Thanks to my awesome friend Tricia for reading the draft and suggested some changes I have to add some more early stuff, but it was great criticism.

24,767- My protagonists day has improved and romance is in the air, but someone else is definitely about to end up on the wrong side of a sharp knife....

26,580 words-  6 rough chapters, 45 standard pages - plenty of room for fleshing things out later on
lots of dialogue today and some important character back-story....

30,085 words - My protagonist is about to find out that things can get a lot worse...and there's a love triangle even I wasn't expecting that is definitely going to complicate things.

33,439 words- my protagonist has made a significant breakthrough, clue-wise. Unfortunately someone close to her made the mistake of trusting the wrong person and was rewarded with a knife (or two) in the back....

37,006 words- Death has caused someone to seek solace in another's arms, which is bound to agitate my unintended love triangle. Someone else might have a chance for unexpected redemption - the question is, does he want to be redeemed?

40, 088 words- Some relationships are starting to fracture under the strain of the recent murder, while others are strengthened. My protagonist has made a major breakthrough, which is turning out to be a double edge sword, and little does she know the worst is yet to come...there's another knife waiting in the dark and this time its hitting very close to home indeed...

42,778 words- A minor clue has been slipped in with the bigger one and my protagonist is on the cusp of a major breakthrough- but the killer is about to throw out a big red herring to try to get the investigators off his trail...we'll have to see who falls for it
Also, I apparently really love writing dialogue - who knew?

45,177 words- My protagonist has realized that knowing as much as she does is putting her in danger. Those around her who need her help to solve this mystery are trying to protect her but it may not be enough.
Also there's a kelpie, because why not?

52, 228 words- my protagonist made a huge breakthrough in understanding why the killer is killing, and then made a very hard decision; she also seems to have uncovered an unexpected ability, but unless she learns how to use it, it could be more of a weakness than a strength. Unfortunately for her the killer has struck again close to home, trying to throw the investigators off his track, and he may have found some new allies.

55049 words- my protagonist has gone to the borders of Fairy seeking answers, and met the an important person there. Soon though its back to reality and there's bad news waiting for her there...

59, 281 words- my protagonist is taking the latest death very badly. The killer has set his sights on her as the biggest risk to his plans, but she may be too blinded by grief to see the danger, and the investigation is in chaos as the police argue over the false clues...

62,736 words- my protagonist has decided to be proactive and try to actively seek the killer out, rather than wait around to be killed, but this might not be the best idea. The investigators have divided and the official search for justice is stalling as everyone fights among themselves, which might also place my protagonist in more danger.

69, 736 - my protagonist found the last major clue, but no one has been able to put the cryptic pieces together yet. The other side of the love triangle chose the worst possible moment to start fighting for the girl, but he may have waited too long - when everyone's guard was down my protagonist ended up in the killer's hands. He's got a fate worse than death in store for her unless she can find a way to use her new ability to call for help, and even then - will help arrive in time?

73,387 words- denouement ~ finis opus
Sorry guys can't say anything else or I'll give away the ending
I suspect with editing and some added description and dialogue it'll pass 75,000...

I know I don't often write about my own personal experiences with deities and spirits. There's a couple reasons for that, including that it's often hard to put such experiences into words. I also find that discussing such experiences is a very soul baring, exposing kind of thing and I'm not a big one for offering up that part of myself to public scrutiny. The biggest reason though is probably the simplest: it is nearly impossible to put a numinous experience into words without losing the very quality in it that made it numinous. Trying to describe it loses its feeling of mystery. You just can't really convey in words what it was to experience the thing you are trying to share. Nonetheless I am going to try here, but I'll take a page from the old Fili and Druids' books (pun intended) and attempt to do it in poetry.
I dreamed last night -
dream or vision or something more -
of ravens and bloody rivers,
hounds and horses coursing,
pounding hooves and howling voices,
Herself* crying "Woe to those who flee!
Blood and battle is upon them!
The fight is upon you!
Stand your ground! Stand and fight!
Hard slaughter and a great victory!"
Her voice and the roaring of a river,
water and blood mixing,
and hounds and horses,
and riders armed and armored,
A feeling of panic and joy
of despair and ecstasy joined
twisting together in my gut
until I wanted to rush forward
into any danger, throw myself,
heedless, into madness and battle,
blades clashing, water rushing,
screams of war and death together,
ravens' wings tearing the air
My breath coming in gasps and gulps,
too winded to add my voice to the din,
but pushing forward, forward, further,
each step a success as earth
become mud as it mixed with blood.
And then, abruptly, the dream was gone
in a baby's cry, in my son's need for me,
I woke to stillness.
No blood. No battle.
No death. No river.
But a yard full of black birds
their voices strident and discordant
singing to me of dreams and shadows
I moved through the day
expecting wings and warriors
the vision like a memory of feathers
which irritates and soothes simultaneously
and, again and again, ceaseless as the tide,
Or a fast flowing stream,
Her voice calling "Awake! Arise!".... 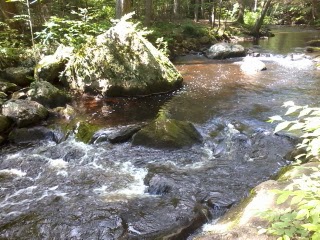 The Morrigan, War, and a guest blog on Patheos

Yesterday I wrote a guest blog for Raise the Horns on Patheos titled The Morrigan, War, & How We See Our Gods. It looks at the more difficult aspects of the Morrigan's mythology and character and why it's important, in my opinion, to face those things in her we fear or are disturbed by instead of turning away from them or trying to minimize them. It also touches on the equally challenging subject of the value of war in the quest for peace. Click over and give it a read if you're interested.
Posted by M.A.D. at 11:24 AM No comments:

Frau Holda, physical worship and a story about knitting

Recently there was an interesting blog about hands-on worship, the idea of honoring our Gods with practical physical actions. I thought it was well written and made good points but it also got me thinking about how often we may be called to do that in our own lives and how - or whether - we respond. So I wanted to share a story about my experience with Frau Holda, and the way that tangible skills are an act of worship in themselves.
When I began honoring Frau Holda one of the first things I felt strongly was that she wanted me to learn how to knit. To me this made sense from her, as she is a Goddess associated with spinning yarn, and knitting is about as close to working with yarn as I can afford to get. But sensible or not I was dismayed. I am a domestic person in certain ways but anything relating to yarn makes me twitchy - its too tedious, too sedentary, too repetitive. I love the end results but I hate the very idea of my being the one to do it. So suffice to say that I was not thrilled to feel called to learn this skill. I dreaded it. I dragged my feet and of course found circumstances aligning so that I had ample unexpected opportunities to learn anyway. I was given all the supplies I needed, including yarn, by my grandmother who suddenly decided I was the perfect person to give her knitting paraphernalia too when her eyesight no longer let her do it herself. The same day I was at my daughters' school book fair, walking past a display, when one of those hobbies-for-dummies boxed kits suddenly fell off the table onto the floor in front of me. The topic of the kit? Knitting of course.
I can't say I've enjoyed the process so far, and I find it challenging my weaknesses in ways that are both frustrating and irritating. I would have thought I was a patient person before starting to learn this skill. But there is undeniably something about the feel of the yarn under my fingers, the motion of my hands, the almost meditative quality of the motion, that is very powerful. I think of my grandmother knitting. I think of all the women in my family for hundreds of years that helped clothe their families with this skill. And I meditate on Frau Holda spinning, spinning, spinning....
I haven't produced anything yet worth bragging about, but I haven't given up either. I keep trying, and honoring Frau Holda with my effort.
Posted by M.A.D. at 7:37 AM 2 comments:

In the Earth - a poem

If I were a Goddess, ancient and mighty
I'd choose to live in the dark earth
deep down in the fertile soil
full of life and death and growth

What does the sky offer, after all?
Boundless, borderless, endlessly shifting
Nothing to dig your hands into
No place to put down roots

If I were a Goddess, ancient and mighty
I'd leave the sky and make a home in earth
where blood and shadow dance together
where life and death are joined
Posted by M.A.D. at 2:03 PM No comments: