The Morrigan, The Dagda, and Samhain

As we're getting into October and people are turning their  attention to Samhain I'm starting to see discussion and references to the meeting between the Morrigan and the Dagda at the river Unshin showing up here and there. This is one of those stories from myth that often suffers from 'telephone game syndrome', that is people who haven't actually read or heard the story themselves taking a small part of it that's widely repeated and creating their own context for it. Which, in the wider scope of modern folk belief, has its place - however today I thought it would be helpful to outline what's actually going on in that part of the story and address some common misconceptions around it that directly contradict the myth.
This isn't intended to argue against the more modern takes so much as to show the context and give some insight into the actual original story for those who are interested. This is easier to do to be honest because there is only one surviving manuscript containing this story, which occurs in the Cath Maige Tuired (CMT), so for once we have a singular source to look to rather than carefully sorting through multiple contradictory texts. 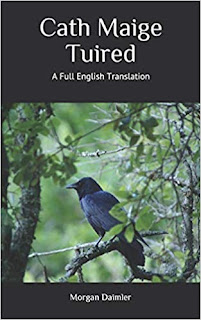 I'd like to look at several specific ideas that I find are really common around this topic:

1 The Dagda and the Morrigan meet up/have sex on Samhain
Well....no, not exactly. They do meet up and have sex, that part's true, but in the text its pretty clear that their meeting occurs more than a week before Samhain - its the battle with the Fomorians which occurs on Samhain.
According to the text the Morrigan and the Dagda meet 'around' the time of Samhain and she asks him to gather the Aes Dana, the skilled people of the Tuatha Dé (TDD), while she goes herself to attack Indech one of the Fomorian kings. She then meets them all at an agreed on point and displays the king's blood as proof she has done as she said she would. The text says of that second meeting: "Sechtmad rie samain sen, & scaruis cach oroile diob go comairnectur fir Erenn uili al-la rie samain."
"This was a week before Samhain and they all scattered until all the men of Ireland came together the day before Samhain."*
Now we can argue that Samhain itself isn't a single day - although its named as the first of November in the texts - but a time period, which is fair, but that time period is generally seen as extending forward beyond the 'day' of Samhain not as a nebulous time around that 'day'. Hence the month of November in Irish is the month of Samhain, mí na Samhna, beginning with the day of Samhain, 1 November. So when we see this meeting in the story its happening at some point around the middle of October, then she goes and attacks the Fomorian king, and then she meets up with the Dagda and Aes Dana a week before Samhain, then the day before Samhain all the Tuatha Dé gather for the battle.

2 The Dagda sought the Morrigan out for her help in battle
When people talk about the meeting of the Dagda and the Morrigan its often framed in the context of the Dagda seeking the Morrigan out, as if he had gone on a quest to find her. However its clear from the myth that this meeting was one that occured every year between the two:
"Bai dno bandal forsin Dagdae dia bliadnae imon samain an catha oc Glind Edind.....Is hi an Morrigan an uhen sin isberur sunn."
"The Dagda was to meet a woman on a day, yearly, about Samhain of the battle at Glen Etin....She is the Morrigan, the woman mentioned particularly here"
Its also important to note that these two figures aren't strangers or casual acquaintances, in fact they are referred to in several places as a married couple and in the CMT its said that the place they lay together was called Lige ina Lanomhnou 'the bed of the married couple'. So rather than going out to search for her he was simply meeting her where they met every year, and because the meeting that particular year was right before a battle she gave him martial advice - marital martial advice as it were.

3 The Morrigan had to be persuaded to aid the Tuatha Dé
One of the more common ideas I see attached to the union of the Dagda and the Morrigan is that the Dagda slept with her in order to gain her aid in the battle with the Fomorians; this is often tied into a related (inaccurate) idea that the Morrigan was some sort of neutral party or was not one of the Tuatha Dé herself.
Now putting aside that we've already established she was the Dagda's wife, its important to note a couple other points. Firstly the Morrigan is very clearly listed as one of the Tuatha Dé across all of the source material we have that mentions that sort of thing and her mother is listed as one of the women of the TDD. She has already appeared in the Cét-Cath Maige Tuired (first battle of Maige Tuired) against the Fir Bolg using her magic against the Fir Bolg and aiding the Tuatha Dé. More importantly perhaps in the story of the Cath Maige Tuired the Morrigan has already been helping the Tuatha Dé prior to her meeting with the Dagda, specifically by appearing to Lugh and inciting him to rise up and fight against the oppression of the Fomorians. She is without doubt on the side of the TDD and working in their favour and nothing in the story directly indicates the Dagda ever asked her for her aid or even advice. It says only that the Dagda spoke to her, they slept together, and afterwards she gave him military advice and went to attack the Fomorian king herself.

4 The Morrigan and Fomorian Princess are the same person
Another idea I see floated around a lot, which may be tied into point three, is a confusion between the Dagda's meeting with the Morrigan and the subsequent meeting and tryst he has with a Fomorian princess. Basically he meets with the Morrigan as discussed above and is later, after other war preparations, sent out by Lugh to spy on the Fomorian camp; in leaving there he encounters a Fomorian woman who says she is the daughter of the king Indech and the two become lovers, after which she promises to work magic against her own people. I will note that the second meeting is entirely omitted from Stokes translation of the CMT because as he says of it "Much of it is obscure to me, and much of the rest is too indecent to be published in this Revue."^; I suspect that this being the easily available public domain material which many people access and that section being omitted is one factor that led to the conflation of the two encounters, as people hearing of the second but unfamiliar with it assume it is in fact the first. In any case while there are some common themes between the two there are also multiple notable differences which makes it clear that the two are different figures within the story.

These are a few of the most common things I run across that I feel should be addressed or clarified. As I said in the introduction people are free to believe what they will and follow different modern ideas of this meeting, but hopefully this has helped clarify the written version of the myth and what it actually tells us.

*all translations are my own
^ I hate Whitley Stokes