I'm going to do a small series of reviews over the next few months looking at the fairy folklore in different films and tv shows, prompted by some discussion on social media. I think this will be fun and also help people see the various threads of older beliefs that are woven into some popular shows and movies. I'm thinking of covering a variety of things including Pan's Labyrinth, Jonathan Strange and Mr Norrell, Legend, Maleficent, The Secret of Kells, Song of the Sea, Siren, and maybe Krampus. But I'll start with one of the most classic fairy films, Jim Henson's Labyrinth. 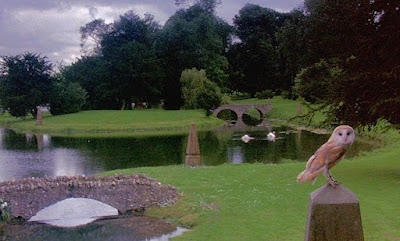 Full disclosure this is one of my favourite movies, in part because Brian Froud was eth concept designer and he is one of my favourite artists. I also want to note that while I'm specifically picking out threads of folklore found across the film there are many, many ways to interpret this movie including seeing it all as a coming of age story, a dream, or as a reflection of Sarah's mental state. I'm not getting into any of those here and sticking purely to the folklore.

Discussing fairylore in Labyrinth is, admittedly, low hanging fruit (pun intended). Brian Froud has said in an interview that "We based Labyrinth on European folklore." so its hardly a stretch to find that folklore on display in the film. I will go over them point by point below. Before I start I do want to quickly note that historically goblins, elves, and fairies were treated interchangeably and the terms were used synonymously so I will be taking the same approach here.

Warning spoilers ahead for anyone who hasn't seen the movie before.

This touches on the main points that I'd like to note with this particular film. There may be more that I have missed or some that I mention that are open to discussion but I think this summarizes the most salient points. From the perspective of fairy folklore at least Labyrinth may be viewed as a classic tale of a quest to recover a changeling, albeit with a lot of extra flourishes and additions, and goblins that are more comical than truly malicious.
*the implication here is that all of the goblins in the labyrinth where once human babies, stolen and transformed.
Posted by M.A.D. at 10:30 AM