The Fairy Folklore in Pan's Labyrinth

Continuing on with my series of fairy folklore in films and television let's look at the 2006 film Pan's Labyrinth, or 'El laberinto del fauno' [the labyrinth of the Faun]. This movie, much like Henson's Labyrinth, is full of folklore references which are worth discussing, as well as many references to classical literature and mythology which are beyond the purview of this blog. As with previous discussions we'll approach this bullet point style and talk about what we find in the movie versus what we'd expect in folklore.
Spoilers ahead! 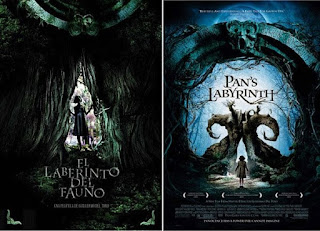 A very quick recap of the plot: a young girl named Ofelia and her pregnant mother go to live with her new stepfather who is a military officer trying to capture rebels fighting the government in Spain. Ofelia is led by a fairy into a labyrinth and meets a creature called the Faun who explains that she is the reincarnation of a princess who fled the world of fairy/underworld and was lost in the mortal realm. Ofelia is given three tasks to complete to return to the Underworld: retrieve a key, steal a knife, and (as is eventually revealed) spill a drop of innocent blood. She is initially given three fairies to help her accomplish this but when she tries to complete the second task she breaks a rule and eats some food after being told not to, resulting in the deaths of two of the fairies. In the midst of this her mother dies giving birth to Ofelia's brother. For the third task, which she hasn't been given in full yet, she is told to bring her infant brother to the labyrinth; when she does so - pursued by her furious stepfather - the Faun tells her to spill his blood. She refuses and her stepfather arrives, takes the baby, and shoots her. As she lays dying, her blood trickles into the labyrinth and the scene cuts to her in the Underworld where Ofelia is seen rejoining her mother and father who are sitting on thrones. The Faun acknowledges her as the princess.

Let's look at the various points of folklore:

Pan's Labyrinth is a complex and nuanced film which leads viewers into a very dark place and presents an end which is simultaneously triumphant and tragic. Fairy folklore is woven throughout the movie, intermixed with myth, literary references, and imagination. The result is a piece that isn't itself folklore but which feels folkloric in its tone and storytelling.
Posted by M.A.D. at 12:22 PM