Sometimes the deities we feel drawn to worship are fairly well known in mythology or can easily be read about in secondary sources material, but other times we are drawn to deities that are obscure. This is the case with one of the main deities I work with, a Germano-Celtic goddess named Artio; in practical terms it means that I have a scant few references to work with and must make up the difference with personal gnosis and experience. I have hesitated to write too much in the past about Her because I knew that it would mean talking about personal practices that were developed through inspiration more than research, but it seems only fair now to offer what I know and my own experiences. Perhaps it will help others who feel drawn to or called by this particular obscure deity to feel more connected to Her.
Artio is also called Dea Artio and Andarta all names that relate to or directly mean "bear" (Monaghan, 2004). One of the best known pieces of evidence relating to Artio is an engraved statue found near Berne, Switzerland. The statue depicts a seated female figure, generally thought to be the goddess, holding a basket of fruit, facing a bear who is standing in front of a tree; an engraving on one side of the statue says: "to the goddess Artio" (Green, 1992). A second find with in inscription was found in Bollendorf, Germany, and other evidence was in France (Green, 1992; Monaghan, 2004). While the areas Artio has been found in could be considered Germanic, the name is Gallic, and She is generally described as either Germano-Celtic or Romano-Gaulish (I favor the former myself). Although the imagery of the statue is obscure and there is a lack of literary evidence, most agree that Artio was likely a goddess of fertility and plenty, and possibly a patroness of hunters as well as protector of bears (Green, 1992; Markale, 1986). Some also theorize that She was a more general goddess of the wilderness and wild things (Monaghan, 2004). Sources agree that She was also seen in the form of a bear, with Sjoestedt placing her in the category of zoomorphic goddesses alongside Epona (Sjoestedt, 1949). It seems likely that the bear goddess, Artio, was eventually replaced by a bear god, Artaios who was synchretized by the Romans to Mercury (Markale, 1986).
My connection to Artio comes through my seidhr work. When I first seriously began to practice seidhr I decided I needed to find out who or what was willing to act as a guide and protector for me. I already had a close working relationship with my Fylgja and with certain plant and animal spirits, but I suspected that taking this sort of spiritual work in a new direction would involve new Powers, beyond Odin and Freya who were already involved. I undertook a spiritual Journey and encountered a bear who was also a woman, simultaneously. She told me that she would be with me for any seidhr or spae work that I did and that her name was Arto. I had never heard that name before, but I knew that Art meant bear so I didn't think much of it. I was also told that when I did oracular spae work I should wear a bear skin instead of a veil. I assumed she was some sort of powerful spirit, and was happy that I had someone willing to be with me in this work. 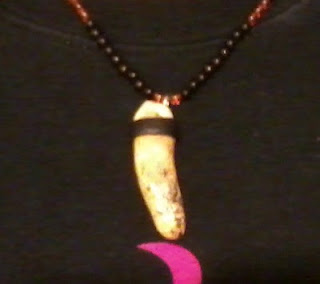 By coincidence (or synchronicity) shortly after this experience I came across a fossilized cave bear tooth for sale and I bought it and made a necklace from it which I have since worn whenever doing any seidhr or spae. The bear fur was, suffice to say, much more difficult to find but did come to me in due time and I use it as I was told to.  I even recently had a dream where I "won" a bear skull and was instructed to feed it by blooding it; I'm waiting to see if such a skull finds its way to me in the real world or not. I later found out that Artio was an actual historic Goddess, although there is nothing in the scant records to indicate a definite connection to any type of oracular or magical work associated with Her. I don't know why I was surprised that I ended up contacting an obscure Germano-Celtic goddess, since, in retrospect, that makes perfect sense as the sort of deity for me with my dual-trad ways. I can comfortably honor her in either a Celtic or Norse (Germanic) context, which is nice. This connection has always worked for me and I feel very protected by Her in seidhrworking and also very connected to the bear. Although I will say that my personal experiences with Her show that She can be both tender and protective and also very intense. I have encountered Her in the Spiritworld and been dismembered, for example, but I have also been healed; I have had Her in bear form charge at me roaring so that I was literally too terrified to move or even think, but She has also been very gentle with me.
I have a small shrine for Her with a collection of carved bear statues and the best image I could find of a goddess and bear. I also honor Her especially on the equinoxes. In the spring I celebrate the awakening of the bear on the spring equinox with a ritual for her that includes offerings of honey and bread. In September I celebrate the dreaming of the bear on the fall equinox with offerings of fresh fruit and vegetables. This is purely my own invention, although my kindred has adopted the practice along with me. We all practice seidhr together and have adopted Artio as a group, which seems to be working well. 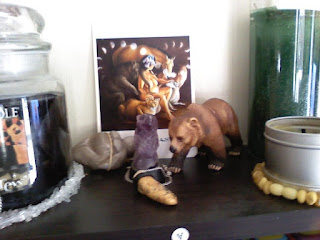 Honoring Artio has forced me to trust my own intuition more and to be willing to follow my gut as I find ways to connect to a deity where there is very little existing historic information to rely on. I have also learned a great deal about bears as I worked on learning about the animal most strongly connected to this deity. Bears are amazing animals, and I have found female bears particularly interesting; they are devoted mothers and excellent teachers, verstaile and intelligent. Bears have several biological quirks, not only do they hibernate, but a female bear can delay pregnancy after fertilization through a process that scientists are still trying to understand. I encourage anyone drawn to Artio to begin studying bears as well (I've focused mostly on black bears because they are native to my region).