Spiritual Masochism or Why I Translate Ancient Texts Into Modern English

Some of my regular readers have undoubtedly noticed that in the last several months I've begun posting more blog entries featuring translations of pieces of the old mythic texts. Some of you may be wondering why - or I may just be boring you to tears. A friend suggested this morning that I may want to explain why I've been doing the translations and how they relate to my spirituality and I thought it was a smashing idea so hear you go. It's a convoluted story, but maybe you'll understand a bit better how my head works and why I feel its so important to share this particular hobby. 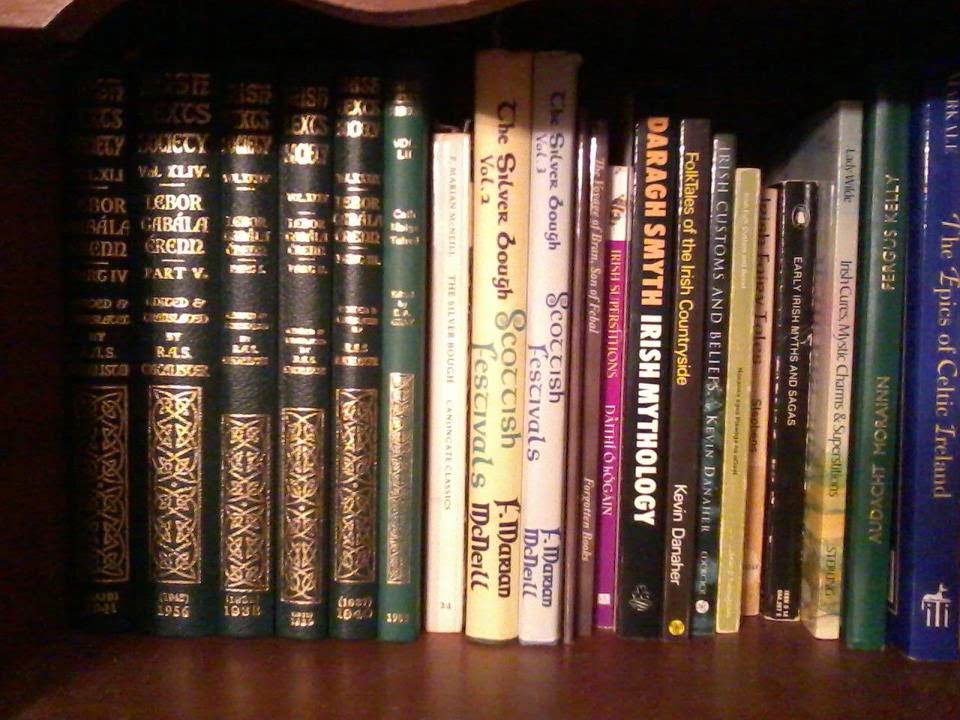 About a year ago while re-reading the Tain Bo Cuiligne I ran across a particular line that really stuck out to me, where Fergus swears on the point of his sword and calls it a "halidom of Macha". As I contemplated that line I found myself wondering if he had really said that in the Irish or if the translator had shifted the meaning in some way and on a whim I found a copy of the Tain as Gaeilge (in Irish) and checked. Indeed the phrase in question - "Mache mind" does mean halidom of Macha, but mind also has some fascinating layers of meaning including blade and oath. It was an intriguing thing to contemplate.
More time went by and I found myself, rather unexpectedly, writing a book on the Morrigan. As I worked with the quotes and translations of the source material for that I found myself once again wondering how well the translation reflected the original. Some people may not realize that the vast majority of translations we have access to for the Irish myths were done a hundred years or more ago, and during a time period when certain subjects where not always handled well and others were, shall we say, treated poetically? An example of this can be seen in Hennessey's approach to the line from Cath Magh Rath about the Morrigan where he translates "Caillech lom, luath ag leimnig" as a lean hag, swiftly leaping - but lom doesn't mean lean it means bare or naked. So properly this line says "a naked hag, swiftly leaping" and there is a significant difference, I think, in the imagery created between these two translations. And to me this matters a great deal. It also means that all the translations we have come to us through a specific filter which does, for good or ill, affect the meaning of what we are reading and change our understanding of it.
So we've established that I am a stickler for semantics and that I am rather obsessed about what the original language actually said, as opposed to what the popular translations say. In Irish - modern Irish that is - there is a saying, tír gan teanga, tír gan anam, a nation without a language, a nation without a soul. I think this reflects a core truth, that our language is not only a basic means of communication but an expression of how we relate to and perceive reality. In psychology we call this linguistic relativity*, the idea that language effects how we think about the world. What this means in practical terms is that to truly understand a culture you must understand the language of that culture.
More time went by and the subject of the Morrigan as a battle goddess came up, and specifically of her inciting battle. The section in the Cath Maige Tuired (CMT) where the Morrigan incites Lugh to rise up and overthrow Bres was mentioned and I realized that although a small initial portion was translated the majority was not. In fact significant portions of the Cath Maige Tuired have not been translated due to the difficulty of the text and possibly the subject matter in those sections**. I decided to try translating the passage myself and found that what it said was profoundly meaningful to my understanding of the Morrigan as a goddess and as a deity of war. Over time I started taking on the project of translating more sections of the CMT, because I believe that it is important to read the sections previously untranslated and think about what they say. I made the decision to share these attempts here, even though I am at best a base amateur, because I wanted to offer other people who have no Irish or Old Irish at all a chance to see alternatives to the common translations and possible versions of the untranslated sections. I truly believe these portions of text are worth the effort to understand, and I also realize not everyone can read them.
As an Irish polytheist there is much insight and truth to be gained from reading the old myths, but there is a catch, because the translations that are available are written through a very specific lens. That lens distorts and changes what it reflects in ways that we are often not aware of. Reading the original language gives us a more direct understanding of the story as it would have been understood originally, but then presents a new challenge of taking that and putting it into a new language without losing too much of the meaning. There is a certain masochism, spiritually driven, that drives me to do this, to keep seeking to understand the old stories and to translate them. And I want to share whatever I can of it, with anyone who may be interested.

* commonly known, somewhat inaccurately, as the Sapir-Whorf hypothesis
** what this means for us as Irish pagans is profound, as the CMT is a very important mythic text and we are in effect relying on translations that are at best piecemeal.