Cáca Síofra - a Recipe from a Dream

Dreams - aislingí - are sometimes a way that I receive communication from spirits and the Good People, as are other more controlled means like journeywork. This would fall into the realm of what's usually called 'upg' or unverified personal gnosis in modern paganism. I have found a lot of value in the lessons and messages I get this way, but generally I find these things are too personal too share. Not always though. What follows is something I was explicitly told to share, for anyone else who might want to use it as well.

I had a dream last night and in the dream I was shown how to make little offering cakes for the Daoine Eile. In the dream I was shown how to make them for the most part and the only thing I was told in words was the oat flour and the name of the cakes, so I'm guessing on the temperature and timing. If you try making them keep that in mind and adjust as necessary. Also I don't bake (or cook particularly well) so bare with my terrible attempt to convey how to do this from what I saw in the dream. They didn't look like modern cakes but were more dense and flat.

Stir up eggs until blended then add in honey, then slowly add flour. Pour into buttered or greased cake pan or divide into several smaller ramekins*. Cook at about 350 degrees F (176 C) for about 35 - 40 minutes for cake, 30 minutes for larger ramekin, 20 minutes for smaller. Take out of oven when the center seem done. Drizzle more honey on the top when cooled. 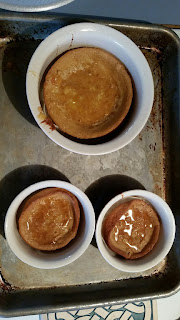 I'd mentioned this on my social media this morning and several people who actually can cook have suggested cooking them on a griddle like pancakes. I'm tried both ways, and am reporting the results below. 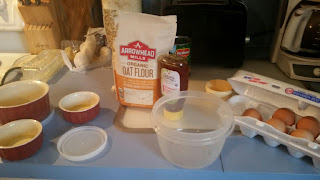 I tried them as griddle cakes and as little cakes in 2 sizes of ramekins. The batter is slightly thinner than a box cake mix (which is my usual go-to for baking) and seems runny but it cooks well.
On the griddle they need to be cooked at a lower temp than normal pancakes would or they burn. I found that a medium low worked well after some experimenting.They cook very quickly.

In really small ramekins they only need 20 minutes in the oven at 350. In the slightly larger size (which was the size I saw in the dream) it was 30 minutes. 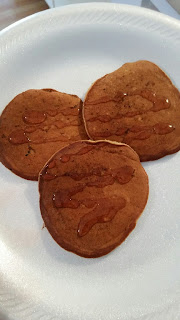 After cooking them I tried some to make sure they were fit to offer. Without honey they are ridiculously delicious. With honey on top they are too sweet for me, but that was how I saw them so that was how I made them to offer. Obviously my preference isn't the issue for offering cakes, but I did verify that they are edible, and in fact really good. They are also nice and simple to prepare, although they take a lot of honey.

I'll be making these for offerings to the Daoine Eile on holy days from now on I think.


*I didn't know what these were, but I was looking for smaller cake pans and stumbled across them in the grocery store and they were the closest in size to what I had seen. I should also add here that I wouldn't recommend cooking these on or in anything made of iron.
Posted by M.A.D. at 4:57 PM