Behind the Scenes with My Fiction

I started writing fiction about 3 years ago, after a friend encouraged me to give National Novel Writing Month a try that November. I did it purely for fun, a break from my usual non-fiction, and never intended to publish it. But as I worked to reach NaNoWriMo's goal of 50,000 words in a single month I started trying to motivate myself by posting daily word counts and little plot summaries on my social media account. Much to my surprise it caught people's attention and my friends started asking me when they'd be able to read the story. 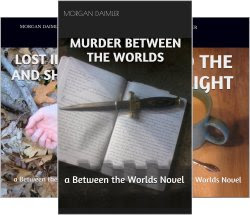 Because of the interest in the book - which ended up at around 84,000 words when it was finished - I decided to publish it. At that point I already knew it was going to be a trilogy (now a series going on 6 books) and I was nervous to see how it would be received. Because you see the same friend who had encouraged me to write the novel to begin with had also given me the sound advice to write what I would like to read. So the book was a cross-genre piece blending urban fantasy, new adult, paranormal romance, and alternate reality, and it was my attempt to take on, and overturn, some popular tropes that really annoyed me. It was based heavily on Celtic mythology, but also on asking myself a series of 'what if?' questions and then imagining answers. But it was also not a story that was fully told in that one book, it was something that would sprawl out over three books, and it was messy in the sense that I wasn't writing to give readers what they wanted but to try to create a story that was fantastical but also felt real. I knew that not everyone was going to understand or like that.

So, I mention overturning tropes. My favorite genre to read is urban fantasy, and there are lots of these to be found there. The ever present Mary Sue protagonist, the Deus ex Machina ending, the pure evil antagonist. There are also some other tropes that seem to exist as unwritten rules in themselves: the protagonist never really gets hurt unless that's their tragic backstory; if they do get hurt that's okay because tomorrow everything will be fine again; rape is only ever used to either gain sympathy for a character or give them (or those around them) motivation or justification; romance is fine as long as its unstable and temporary; protagonists can't get married or have families unless the series is ending. 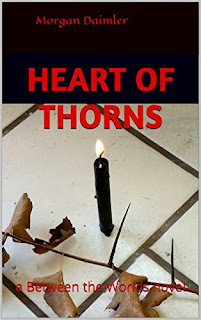 When I set out to write my books I wanted to tackle a lot of these head on. I may not have fully appreciated how difficult that would be. I wanted a main character who was smart and resourceful but was also a person with reasonable limitations, someone who did not in fact have her life together but was fairly happy with her dysfunction. In other words someone who was as ordinary as possible, given she lived in a world that was stuck between mortal earth and Fairy. I wanted her existence to reflect her world, so I made her half human and half elven, and I gave her the sort of childhood and life that I felt both fit her story arch and would be relateable to people. She lives in a world where magic is a real, tangible force so I wanted her to have a foot in both worlds there too; I made her a witch in the human sense and I also gave her a magical ability that spanned both worlds, something that made her a bit of a misfit on both sides. There are points where she's in trouble and she needs other people to save her, and part of why that happens is because I didn't want her to be a Mary Sue who miraculously started spewing fire just in time to save the day. Especially at the beginning of the series she needed a starting point to grow from.

I get really annoyed reading books where characters get hurt, in any context, and then get up and walk away as if nothing happened. Yes, my characters are injured in these books, and no they don't just shrug that off and go on with life. Major injuries change a person. Yes, rape is something that occurs to main character in my books and part of why I did that was because I hated seeing it treated the way it was in other books. I hated seeing it used as either a way to make a reader pity a character or a way to justify why a character had suddenly become very bitter and/or homicidal. I wanted to write a piece of fiction where someone is hurt once, and then again - because life is painful and scary like that sometimes - and she walks away from it with scars, physical and mental. But she also heals from it, over the course of several books, because healing is a process not the turn of a couple pages. I wanted to show that even in fiction life can go on and people can still love you and support you and you can be strong again.

I also wanted to include romance as an aspect, but not the rather frustrating back-and-forth never really settled romance that most other books have. I knew going in that my protagonist had a certain unique quality, based on modeling her after a very specific being from Celtic mythology, but I also knew that she - and the reader - weren't going to learn that fact for several books. But it played into the way that her romantic life shaped up and I hope that I managed to build it up in a way that readers felt an 'a-ha!' moment in the third book. I also wanted to have her in a relationship that ended up being solid, although not typical. Including a variety of sexual orientations, lifestyles, and viewpoints was another thing that was important to me, as someone who knows what its like to feel like my own demographic has very little representation in fiction.

I tried hard in my fiction to make make my characters as real as possible and to let them act as naturally as possible within the narrative. They have problems and they make mistakes. Sometimes they make poor choices in how they deal with situations, and that leads to consequences. Some of the protagonist's friends aren't always good people, and some of the antagonists aren't entirely bad people. And ultimately I hope that readers feel like they understand why most of the characters do the things they do, whatever those things are.

I'm just starting to write book number 6 and I'm excited to share the next part of the story with the people who have been enjoying the series. And to end this with a fun fact - I base the words in my Elven language on Old Irish (probably no big surprise there).
Posted by M.A.D. at 6:55 AM