That Time I Unseelied a Tree, and Why You Should Too

So first a story.

I have a fairy tree in my yard and I had the idea at one point to start tying ribbons on it, in the spirit of the rag tree tradition. Now usually a rag tree is by a healing well and the ribbons or bits of cloth tied on it represent prayers for healing of either the person or someone they are praying for. I knew this but still felt drawn to put ribbons on my own tree, and I don't deny I did it badly, because I simply used store bought ribbon. I can say here that my intentions were good, but I've never been a big believer that intentions mitigate harm caused. After a time the tree had quite a lot of ribbons on it, and after a time I started feeling strongly that I needed to take them off - I was even dreaming about it. But I really, really didn't want to remove them. It seemed counterintuitive and sacrilegious to do so, to remove what had been place with prayer and its own little ritual. Yet in the end it became a compulsion, and one day as I walked past the tree on my way to my car I found myself stopping, unable to go on until I removed the ribbons. I went back into the house, found a pair of scissors, and spent enough time that I was late to work taking all the ribbons off. Afterwards I felt a blend of relief and horror at having, effectively, 'unseelied' (unblessed) my tree.

Here's the thing though, as upsetting as it was for me to take those prayer ribbons off that tree, and as much as I felt like I was doing something wrong - was in effect unblessing the tree - what I did was important and necessary. The ribbons I'd put on were synthetic fibers; they were not rotting away with time but instead were strangling the branches they were tied on. In several places when I managed to get the ribbon off there was a clear indent in the branch where the ribbon had started to grow into the tree, and it was obvious to me the harm my actions had caused. I had made a critical mistake in not using natural material and in not tying it loosely so that it would either fall apart naturally or be pulled off by the wind. My well meaning actions would have killed my tree eventually, and removing the ribbons, as much as it pained me to do it, saved it.

That said, there are two main points I want to make here, first about participating in rag tree practices and secondly about removing things already tied to trees at sacred sites.

Many people today either want to emulate the rag tree practices or look at participating in it while visiting Ireland (or other countries that have the practice) and I am urging everyone to please seriously consider what you are tying to these trees. Recently there have been some good discussion of the importance of proper rag tree practices online both by the Tara Skryne Preservation Group and other travel pages. If you want to tie a rag on a sacred tree you need to be aware firstly that rag trees are very specific trees, usually by a holy well as I've mentioned, and that you can't and shouldn't tie just anything onto the tree. Every tree you run across is not appropriate to tie things to, and just because it's at a sacred site doesn't make it a tree to tie prayers to. Also if you are going to tie things to a tree please use natural, degradable materials. And please don't push coins in o the bark, that will poison the tree.

When you visit sacred sites and holy wells you will see many strange things tied to rag trees. Some people believe it best to leave what is already tied there alone; others advocate for removing what is and will harm the tree. This is a complicated subject because there are issues with people removing all rags from rag trees, and even cutting the trees down, in protest against the practice itself and I am by no means advocating that. However as an animist and pagan I do think we have an obligation to put the health of the tree before the symbolism of the plastic and synthetic material that is tied to it and slowly killing it. Natural material is fine and should be encouraged, but what amounts to rubbish if left there will only kill the tree that people claim to find sacred.

The reason I began this with my story was to make a point. I was deeply reluctant to take those ribbons down, even though they were my ribbons and I was being told repeatedly to remove them. There was a discussion on a sacred sites travel group I belong to recently about whether it's ethical to remove other people's ribbons from sacred trees, and in my opinion you should, even though I understand the reluctance to remove other people's prayers. Understand it on a deeply personal level. There is an almost atavistic aversion - in my experience - among spiritual people against interfering with other people's spiritual devotions. Yet ultimately we need to look beyond the intention of what have been tied on the trees and to the spirit of the trees and land itself. If we are seeking to respect those spirits, seeking to truly be blessed by these holy places, then we must act in ways that are aligned with that concept. Doing things that kill the sacred trees, ultimately are unblessed - unseely - actions. Removing plastic, non-biodegradable, metal items, no matter what sacred intent was behind their placement is ultimately a blessed, or seely, act because it saves the life of the tree. I titled this post 'the time I unseelied a tree' because that was how it felt, and it was a terrible conflicted feeling. But sometimes we must do what feels wrong in order to ultimately do that which is right.

Removing those ribbons felt like unseelie'ing the tree but in the end it resulted in an increased blessing, and much happier spirits. And I don't regret doing it at all. 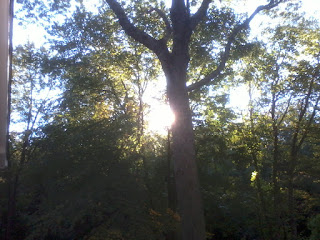