Celebrating Samhain with a Complex Child 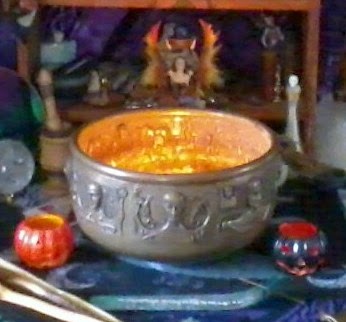 So, how do we celebrate with my youngest daughter? We start by talking a lot ahead of time about the holiday, because she is very into routine and unexpected things can throw her off. On the first day of Samhain we go trick or treating and when we get home we leave out an offering for the Daoine Eile. The children each choose something to offer from the candy they have gotten. On the second night we honor the Gods by lighting a fire in my largest cauldron. Because my daughter is phobic of the dark we do not do turn out all the lights, although I used to do so before to mimic the ceremony at Tlachtga. I tell the children stories of different events that have occurred in myth on Samhain and often we end up talking more generally about different Tuatha De Danann that interest them. We have a ritual to an Morrigan and an Daghda and make offerings to them, and divination is done for the year to come. Sometimes my youngest daughter stays for the whole ritual, sometimes she doesn't. On the third day we honor our ancestors. An extra place is set at the table and water and food are set out at dinner. We light white candles on our ancestor altar and we tell stories about our beloved dead. My youngest daughter struggles with expressing her emotions so she enjoys the stories of the older dead who she never knew but will usually leave when we talk about the more recent dead. We offer coffee on the altar and leave out something on the doorstep for the wandering dead.
And that's it. The biggest accommodations we make for my daughter are letting her come and go as she pleases during ceremonies, and letting her sit or play during the ceremonies if she's having trouble focusing, and making sure nothing is too dark or too loud. We also keep each focused ceremony short and to the point because that's easier for her to handle. It's not that hard and while it has changed how I conduct rituals and the flow of my ceremonies I do not in any way feel that I've lost any substance. In a situation where I feel compelled to do something really complex or drawn out I do it by myself but honestly that's very rare. My religion is part of the legacy I want to pass on to my children - all my children - and its important to me that she be and feel included.

*I do acknowledge that the issue of having an interpreter available is complicated because it is not a common enough skill. Maybe we should all try to learn a little sign language to bridge the gap.
Posted by M.A.D. at 1:02 PM