So Friday is my birthday. I've been thinking a lot about that, and about something that was posted in a group today about the variety of witches out there:
There are many, many approaches to witchcraft and some are completely different from others, but it is true that the vast majority of witches in the Western world seem to follow what is generally termed a "right hand path" or benevolent witchcraft. This approach usually adheres to the things mentioned above: a belief in a Westernized understanding of karma, following the Wiccan Rede, and belief in the Rule of Three. Because this is the most popular approach it can sometimes be seen in groups as the only acceptable approach, particularly with an emphasis on witchcraft that focuses on healing, blessing, protection, and a strong ethic of not causing harm.
However....
I'm a witch.* I have been a witch now for more than 24 years.
I don't believe in karma*, in the sense that what we do comes back to us in a reward/punishment system, or that being good makes good things happen. I do think that being a good person, however you define that, has value and should be strived for. But I don't think there is some universal power which metes out punishment or reward based on an arbitrary system of good or bad actions.
I don't follow the Wiccan Rede, because I am not Wiccan, firstly, and secondly because I believe that sometimes "harm" is good and necessary. Sometimes a small harm now prevents a greater harm later, or is being done for a larger purpose, such as the "harm" done to my daughter when she had her cardiac procedure in order to correct a dangerous irregular heartbeat. Sometimes its being done to protect something, like when I have to kill a hive of wasps that is above my garage (my husband is severely allergic). Sometimes its simply a matter of deciding that the action is necessary, and taking it.
I don't believe in the rule of three, in any sense. I do believe that our mindset, be it positive or negative, effects our life, and that how we treat other people directly effects how other people, in a very general sense, treat us (ie if you are nice to people they are usually nice to you, if you are jerk they are generally a jerk in return). But life experience has shown me that bad things happen to good people and good things happen to bad people all the time. And that's not even getting into the stickety-wicket of who decides what is "good" and "bad" to begin with....
I have hexed. I have done bindings and banishings. I deal with spirits, both on friendly terms and commanding them (usually to leave a place). I am very pragmatic in my magic; I do what needs doing. And there has never been any terrible consequence to me from anything I have done (although I will add here that I am very careful and I know what I am doing). The greatest consequence I have faced is the judgment and censure from some people within the pagan community for being open about the sort of witch that I am.

I think, sometimes, that paganism has spent so many decades trying to convince the rest of the world that we are all harmless and safe that anytime someone comes along and says, "No if it needs doing I'll do it, even if its sad or unpleasant or hard" there is an automatic response of immediately rejecting that idea. We don't want to own the dark witch anymore, or we want to make it a clear cut matter of "good/light" and "bad/dark". We have bought into our own PR and we want our witchcraft safe and nice and palatable for the masses of non-pagans. We don't want the dark and scary as a serious practice, only as a sort of juvenile "phase" that we say people will grow out of or as a side-show all-flash-no-substance joke. Its not easy to break out of that mindset, as a community. Heck it was hard for me. Everyone wants to be the hero in the story, not the pragmatist.

There are all sorts of witches in the world and that's exactly as it should be. We need the variety. Some are very gentle. Some are very loving. Some are very peaceful. Some are all of that but if their back is against a wall they will defend themselves.
I am not that sort.
I was told once, in a visionary experience, that I needed to own the idea of being a badb, a bantúaithech, for lack of a better translation an "old school witch". Someone who isn't afraid of doing what needs doing. Who can heal or hex without hesitation. Who isn't afraid to go where other people truly do fear to tread. Who owns their own darkness and understands the balance that is needed between dark and light to preserve Firinne (truth/right order). The word badb itself when applied to a human means a witch of the dark and dangerous sort, the kind who shows up and gives an ill prophecy and then works magic to ensure it happens. A cursing-witch. The word bantúaithech* is related to the word túaithe and has strong negative connotations, being related to túaithbel meaning lefthand-wise, against the sun, to cursing, of working against the positive, and is also related through túath to the aos sidhe who witches were reputed to deal with and get much of their skill and knowledge from. So a badb or bantúaithech is a witch who works against the sun and who deals with the fairy folk, who curses and prophesies.
This was not a message I wanted to hear, nor one I was quick to embrace.
I really didn't want to be that person.
Because there is a comfort in acceptance. There is a comfort in staying weak, and avoiding confrontation, and letting other people handle the messy work. There is a comfort in being able to say "I am harmless and good and only ever help everyone".
But you can't fight dán and a raven can't be a robin no matter how much it wishes it was.
So I have spent a lot of time learning to be a bantuaithech, an old school witch, and learning that you can still be kind and gentle even when you are the one who knows how to hex and does it when it needs doing. Learning that you can still be nice even when you are the one who isn't afraid to walk straight into the darkness and handle what you find there, and you are the one who does the things that generally seem to horrify so many other people. I had to learn that all those frightening connotations with the words badb and bantúaithech nonetheless represent the preservation of right-order, of fírinne - the dark witch doesn't curse for fun or maliciousness but in the myths and stories she does so to bring back order when there is a great imbalance. She uses her own power to correct imbalances, often by bringing down important people - often kings or heroes -  who have abused their power or greatly transgressed the social order. She is not a bad person but she is the one who must do the dirty work in the stories in order to bring back balance. I had to learn not to fear using power when it needed to be used, especially in situations where those who were otherwise powerless needed to have someone act for them. I learned, ultimately that sometimes the only way to preserve right-order is to go against it for a time.
I am that sort of witch, but it doesn't make me a bad person - if anything it has made me a better person because I understand the fear, and anger, and hatred that far too often drive other people.I embrace the darkness because I don't see it as frightening or dangerous, just as beautiful and empowering. I can empathize with suffering and being broken because I have been there. I appreciate the importance of being good and kind because I am so aware of the reality of the other side of that. I am kind not because I fear the consequences of not being kind - I don't - but because I know the value of kindness for its own sake.

......but like Al Capone said: "Don't mistake my kindness for weakness. I am kind to everyone, but when someone is unkind to me, weak is not what you are going to remember about me." 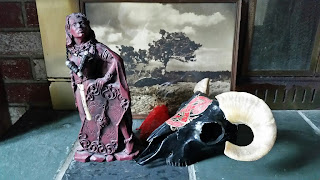 *I've discussed in previous blogs that I am both a witch and a Druid. I see the first as a personal practice, a skill, and the second as a role within the community. In my life they provide balance and dovetail nicely with each other, and both work within my Irish Reconstructionist Polytheism.
* okay that's a bit of hyperbole on my part, but its complicated. I've blogged about it previously here
* - I am editing this to clarify a point: the word bantúaithech is Old Irish and is the word used in the myths to describe female magic users, generally translated as "witch". Be Chullie and Dianann are referred to this way in the Cath Maige Tuired when Lugh asks what power they will bring to the fight (they promise to enchant the trees and stones and earth to appear as a great army by the way), and a further list of ten women of the Tuatha De Danann is given and described this way in the Banshenchus. The word, however, did not survive into modern Irish. There is a similar term, tuathánach, which means rustic or country dweller and tuathbheartach means evil-doing. Interestingly túathgeinte, meaning the Good Folk did survive as tuathghinte in modern Irish. Similarly badb, meaning a witch, is Old or middle Irish; in modern Irish babdbh when applied to a human means a scold and only has vague connotations of cursing.
Posted by M.A.D. at 7:59 AM