One of the more well-known types of fairy, by name at least, are goblins but many people are vague on what exactly goblins are. So today lets take a look at goblins, what they are, and some folklore surrounding them. The following is an excerpt from my book 'A New Dictionary of Fairies' 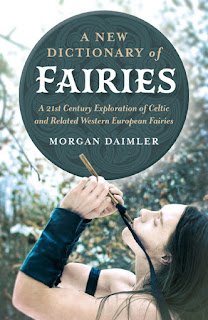 The word goblin itself dates back to about the 14th century and is believed to possibly come from the Latin Gobelinus, and to be related to the German Kobold; the meaning is given as an ugly fairy or devil (Goblin, 2016). Originally the word goblin was not applied to a specific type of fairy being but rather was used as a generic term, in line with the older uses of fairy and elf, to indicate a more general type of being. In Scots, for example, we can see more than a half dozen kinds of fairies which are described as goblins, from Gunnies to Whaups (SLD, 2016). The name goblin was used in earlier periods as a synonym for other negative types of fairies, such as thurs and shuck, both of which had connotations of maliciousness and evil (Williams, 1991). The prefix 'hob' was added in front of the word goblin, giving us hobgoblin, to indicate a goblin type spirit which was less negative and more benevolent; hobgoblins were inclined to mischief but also known to be helpful to people where goblins were not (Briggs, 1976). MacKillop posits that the word as well as the being were borrowed into Celtic belief from outsiders, likely from Germanic folk belief probably of the Kobold (MacKillop, 1998). The Irish Púca is sometimes described as a goblin, and goblins are often seen as equivalent to bogies. An array of subgruops of fairies are considered goblins or hobgoblins including the aforementioned Púca (and more general Puck), Bogies, the Fuath - themselves a general term inclusive of specific types - Boggarts* and Bogles, who are usually considered the more evil sort of goblins, the Welsh Coblynau, and Irish Clauricaun and Dullahan (Briggs, 1976; MacKillop, 1998). Even the usually benevolent Brownie is sometimes considered a goblin, or perhaps more properly a hobgoblin (SLD, 2016; Briggs, 1976).

When they appear in folklore goblins are generally described as wizened or smaller than the average human and unattractive in their features, ranging from grotesque to animalistic. In Rossetti's poem 'The Goblin Market' the depiction of the goblins directly relates them to animals describing them with whiskers, tails, and with fur (Rossetti, 1862). Dickens described them as small, with long arms and legs, and rounded bodies (Silver, 1999). These descriptions are typical of those found in older folklore as well where goblins are usually referred to as grotesque and ugly. Generally goblins are male and their physical descriptions reflect ideas closer to imps or devils than the usual fairies who appear fair on the outside no matter how dangerous they may be on the inside. This may reflect a belief that goblins, although a type or kind of fairy, were closer to or on the border of being demonic; this is muddy water at best as there was often a fine line between fairies and demons in the medieval period especially among the literati. Briggs suggests that it was particularly the influence of Protestant belief which edged the goblins into the category of the demonic as they directly equated them to 'imps from Hell' (Briggs, 1967). In fact imp is often given as a synonym for goblin, further confusing the issue. Specific types of goblins, such as the bogies, were known as shapeshifters as well and could alter their appearance at will in order to more easily deceive people. Because of their fearsome reputation many people were afraid of goblins, and even the generally more benevolent hobgoblins (Evans-Wentz, 1911).

Goblins were known to favor specific locations and might set up residence in a home; in one story a bogey takes over a farmer's field and had to be tricked into leaving (Evans-Wentz, 1911; Briggs, 1976). In Rossetti's poem they have their own market and a well worn path which is taken to and from it each dawn and dusk. Like many Fey goblins are usually considered nocturnal and are most likely to be encountered at night (Evans-Wentz, 1911). Goblins of various sorts might also be associated with wilder locations and with the ruins of former human habitations and were known to lead people astray, either as part of a frustrating but ultimately harmless joke or to the person's eventual death (Briggs, 1967). By modern reckoning goblins fall under the dominion of the Unseelie court and may be either solitary or trooping fairies, depending on what kind of goblin is being discussed (Briggs, 1976). Hobgoblins, however, are harder to be certain of as they are usually seen as more benign and can be associated with helpful spirits like Brownies.

There is at least one well known piece of more modern literature which refers to goblins, Rossetti's poem 'The Goblin Market' which I have written about previously. In the poem the goblins appear in a fairly typical form being deceptive, malicious, and grotesque in appearance. They play the usual role of a group of fairies trying to trick mortals, in this case by getting them to eat dangerous fruit. In the poem when the person the goblins are seeking to trick resists they become violent, which is also inline with the general temperament normally seen with them. Goblins play a prominent role in the film 'Labyrinth' where they are depicted more as hobgoblins, being somewhat dangerous and set against the story's heroine but overall more mischievous than actually malicious.

Ultimately goblins are a difficult group of fairies to define, both a specific type of being and also a class of being. The word itself is just as ambiguous, the etymology uncertain beyond the 12th century, and the ultimate root unknown. The term goblin can be used to indicate a specific being which is small, grotesque and malicious or a broader category of beings that were generally described as 'imps' and ran a gamut from devilish to mischievous. When the prefix hob is added it indicates a more benign nature to the creature being discussed; Shakespeare's Puck is referred to as a hobgoblin in the play A Midsummer Night's Dream. However Protestant influence did add a darker reputation even to the hobgoblin who were considered out-right demonic in some places. The only way to be certain of the usage of goblin or hobgoblin is to look at the context of the reference, however one can safely say that goblins were generally viewed as dangerous and to be feared, whatever sort of goblin was being discussed.

*boggarts may also be angered brownies and there is a somewhat fine semantic line at times between a hobgoblin and a brownie.